Well, the end of this crazy, insane year has finally come - and, as usual, I'm not ready for that to happen just yet.  (Could I get a 2-week extension please?)
I should have a few finished projects to share with you - after all, I've had all month to work on them!  (What have I been doing with all that 'spare time' that I'm supposed to be enjoying?)  Yesterday, I decided that I was going to try to finish one or two of my Rainbow Scrappy Challenge projects - it's just a matter of putting the assorted blocks or strips together - that can't be that hard, can it?  Well, it might not be if I had actually finished the November portions of my projects; then I had to decide on, and make, the sashing or whatever assembly method that I chose.
I actually managed to finish one of the tops, and a second one is quite close to being finished (no pictures of that one, unfortunately).  I'm planning on both of these quilts being donation projects, and I think that this first one will be a cheerful one, wherever it ends up!  It's the "Scrappy Braid" strips - 3 sections each month for 11 months.  I chose a greeny-taupe Kona cotton solid (Limestone?), and just placed 2.5" strips between the rows; 3.5" strips around it finished it off.
They say that "the proof is in the pudding" - so, get out your spoons, 'cause the pudding is right here: 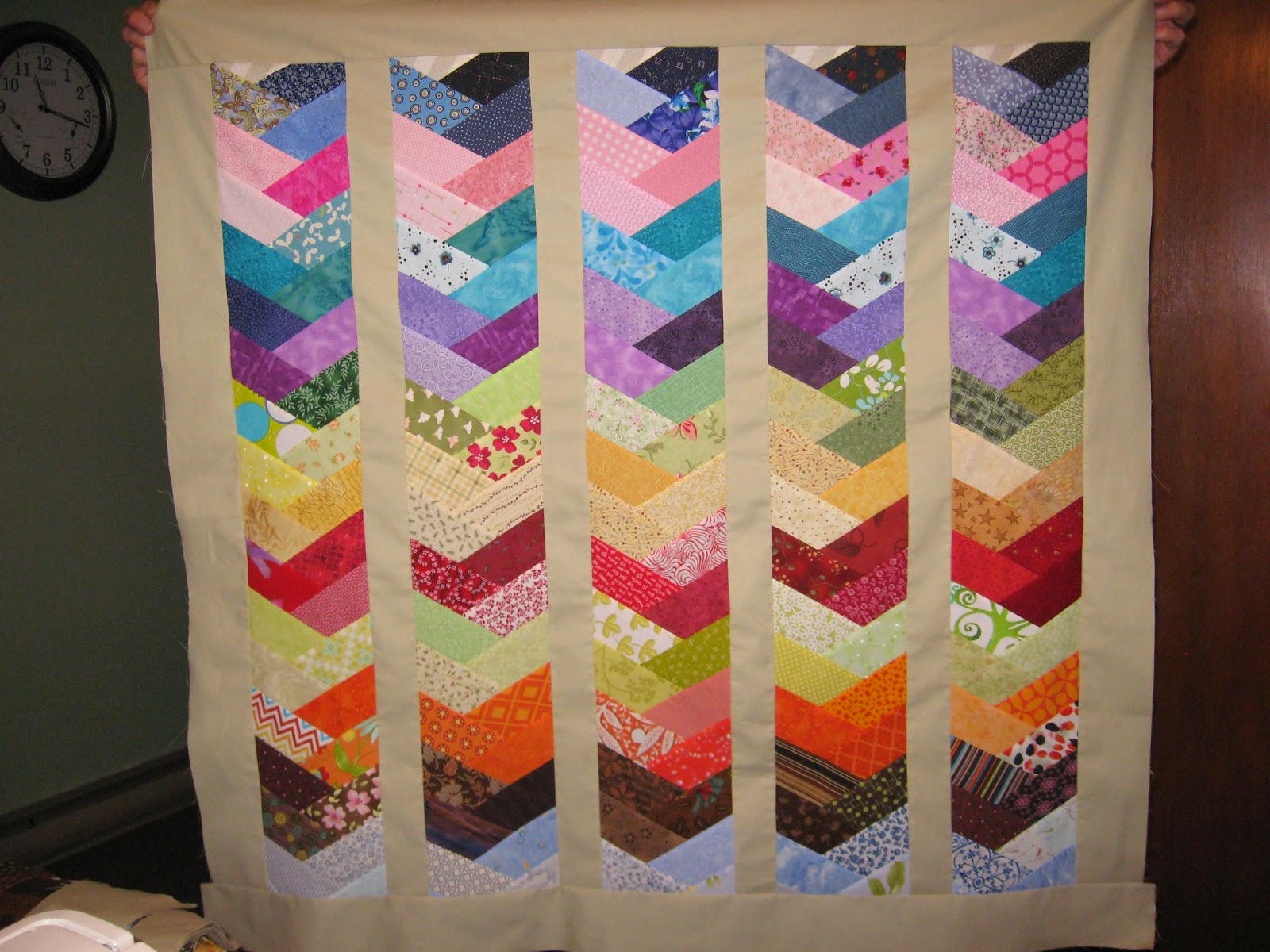 My always popular "Kickin' Stash" blocks will be getting mottled gold sashing strips; I'm not completely sure if there will just be continuous strips, or whether there will be cornerstone blocks at the intersections.  However, that decision will have to wait for another day - tomorrow is New Year's day, and I have a quilting mystery to prepare for!  It's going to use a lot of batik fat quarters, and butter and (?)limestone Kona cottons for the backgrounds.  Hopefully, I'll have a picture or two by tomorrow evening...
Posted by Quilting with Jannette at 8:38 PM 1 comment:

I finally feel like I can sit back and take a few deep breaths!  It was a lot of fun having our kids home last weekend, and especially, enjoying giving, and getting our Christmas gifts.  They were all on their way home again by Tuesday afternoon, and then "life" kicked in again - doing the routine things that had been put on hold while the kids were home.  Now, that part of my week is mostly behind me, and I'm able to pick up my knitting again.  I'm still working on finishing "Pears the Elephant" - I've got all 4 parts of the ears "on the go" at the same time, so that I make sure all the shaping gets done at the same time - the two back parts are the gray, and the fronts will be striped, white, fuchsia and blackberry. 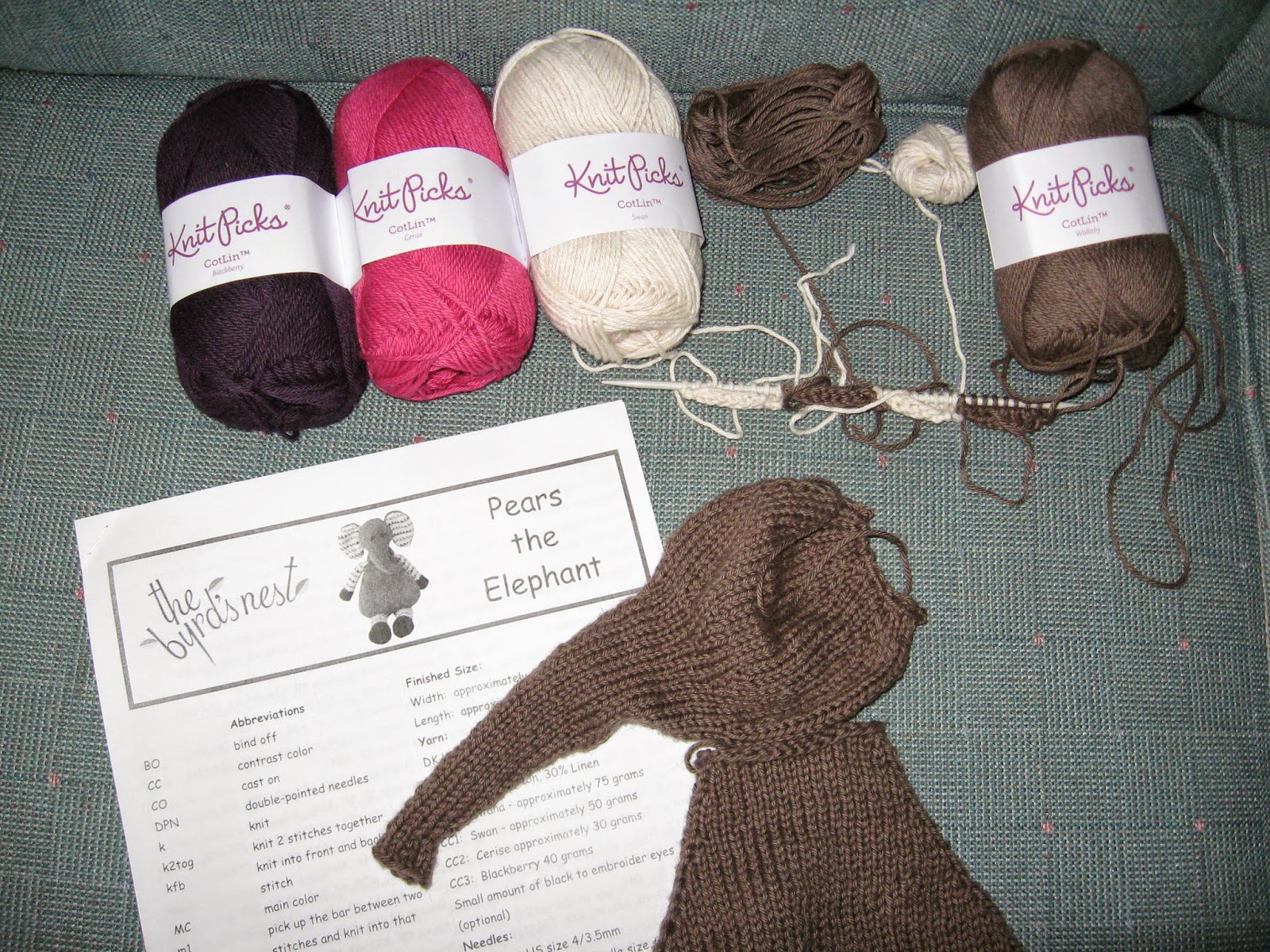 I decided that having only 1 knitting project on the needles at one time is boring, so I started the first of what will be several pairs of socks for our (as yet unborn) grandson.  This little sock is working up really quickly - I did all the ribbing in about 3 hours (between getting up a few times to tend to other little things), and I've just done about 4 rows of turning the heel.  The pattern calls for leftover sock yarn, which I never seem to have, so I bought a ball of Kroy in typical boy colours (Singin' the Blues), and I'll knit socks until the ball is finished.  That way, if one sock gets lost (which inevitably happens), there will be a replacement available!  I'll try to make the socks match, as much as possible.  By the time this sock is finished, I'll have a better idea of the striping pattern. 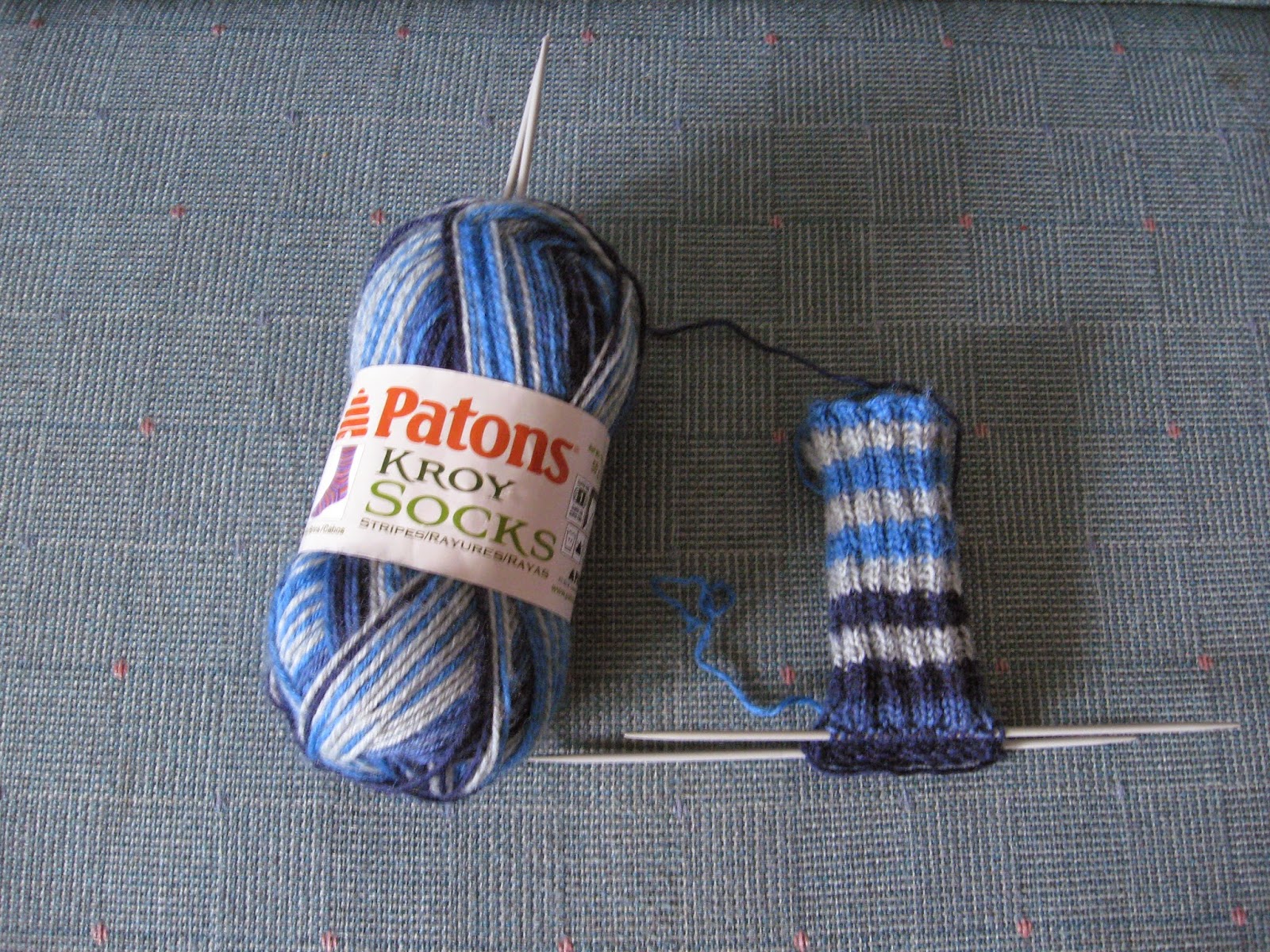 Posted by Quilting with Jannette at 11:07 AM 2 comments:

I can show you now!

Hooray!  I'm tired of having to keep secrets, and, since we had our Christmas gift "opening" party yesterday, I can finally show you what I've made in the past month or sew....
First off, my November "ALYoF" project - my younger daughter and her hubby are expecting their first baby in a few weeks (which means I'll be a grandmother!).  They have most of the urgently-needed items for the nursery, but they're still working on the little extras.  We had a baby shower here a few weeks ago, and she got a few items for the nursery walls, but I wasn't able to finish the project I was working on.  I had made a number of bibs and burp cloths, and I'm knitting a sweater set, but what really caught my eye was the "Grow Chart" from the Fall 2013 Quilts From Quiltmaker's 100 Blocks.  Of course, she wasn't pregnant when I bought the magazine, and I chose it for a number of other projects in it, but when I heard that a baby was on the way, I knew I had to make it!
This is what my version of the wall-hanging looks like: 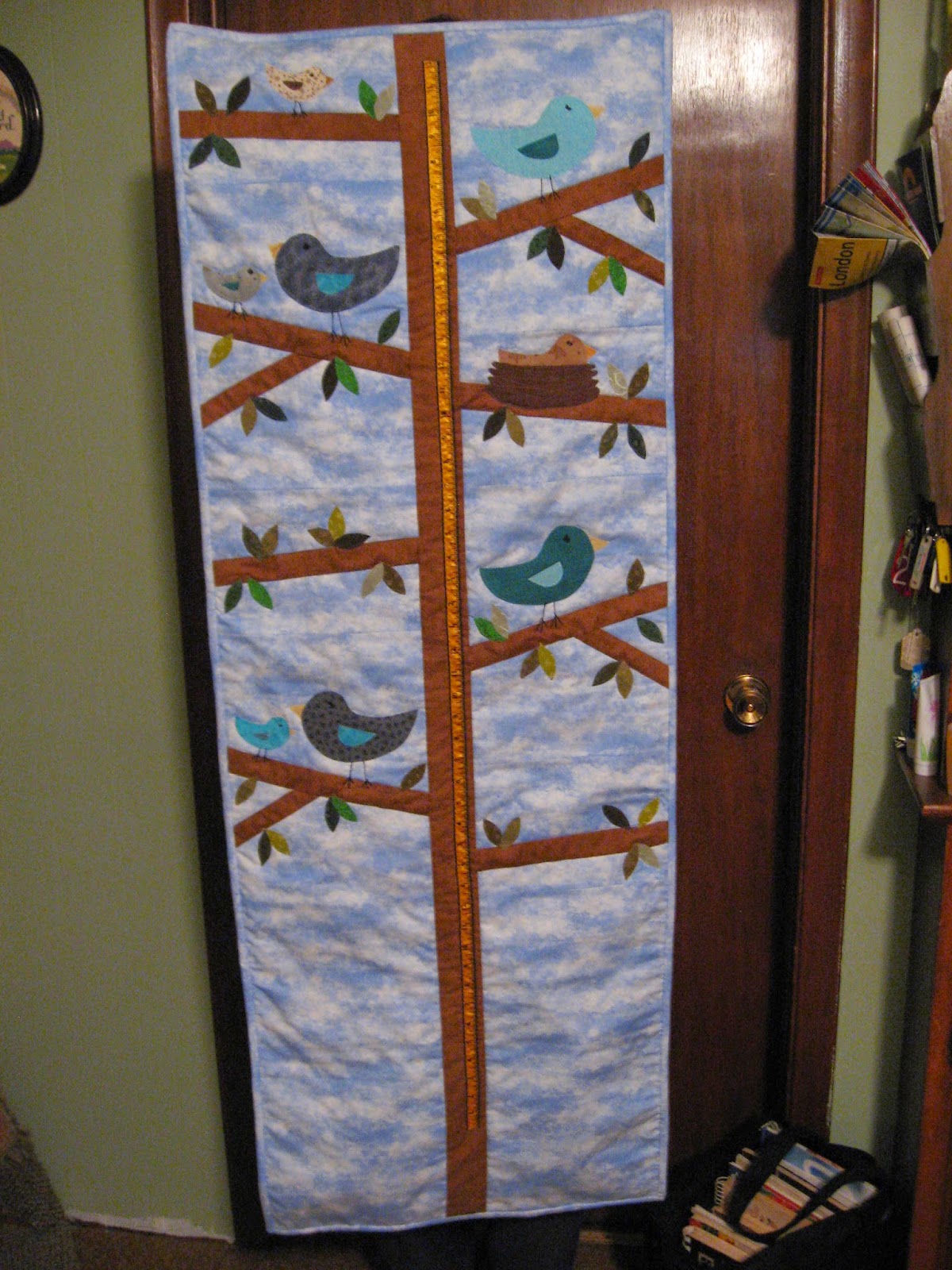 My daughter and her hubby were thrilled with it, and were immediately trying to decide where to hang it.
I also had a knitting project on the go for my oldest daughter.  I've had a sweater that I knit for myself when I was about 19 - I've literally loved it to pieces - there's a hole where the left elbow used to be, and another one in the collar.  Unfortunately, I've long since lost the pattern, and letters to the pattern company have gone unanswered.  My daughter LOVES that sweater, and has been hinting for 2 or 3 years that she'd love one just like it.  Not having the pattern for it is a bit of a problem - that is, until I picked up Fons and Porter's Love of Knitting Fall 2014 issue - and there was a sweater pattern that really closely resembled my sweater (the Olive Jacket)!  Both DD#2 and I decided that it was a close enough match to the original.  I even found yarn in a close-enough colour - and she is THRILLED with it!  This is what it looks like: 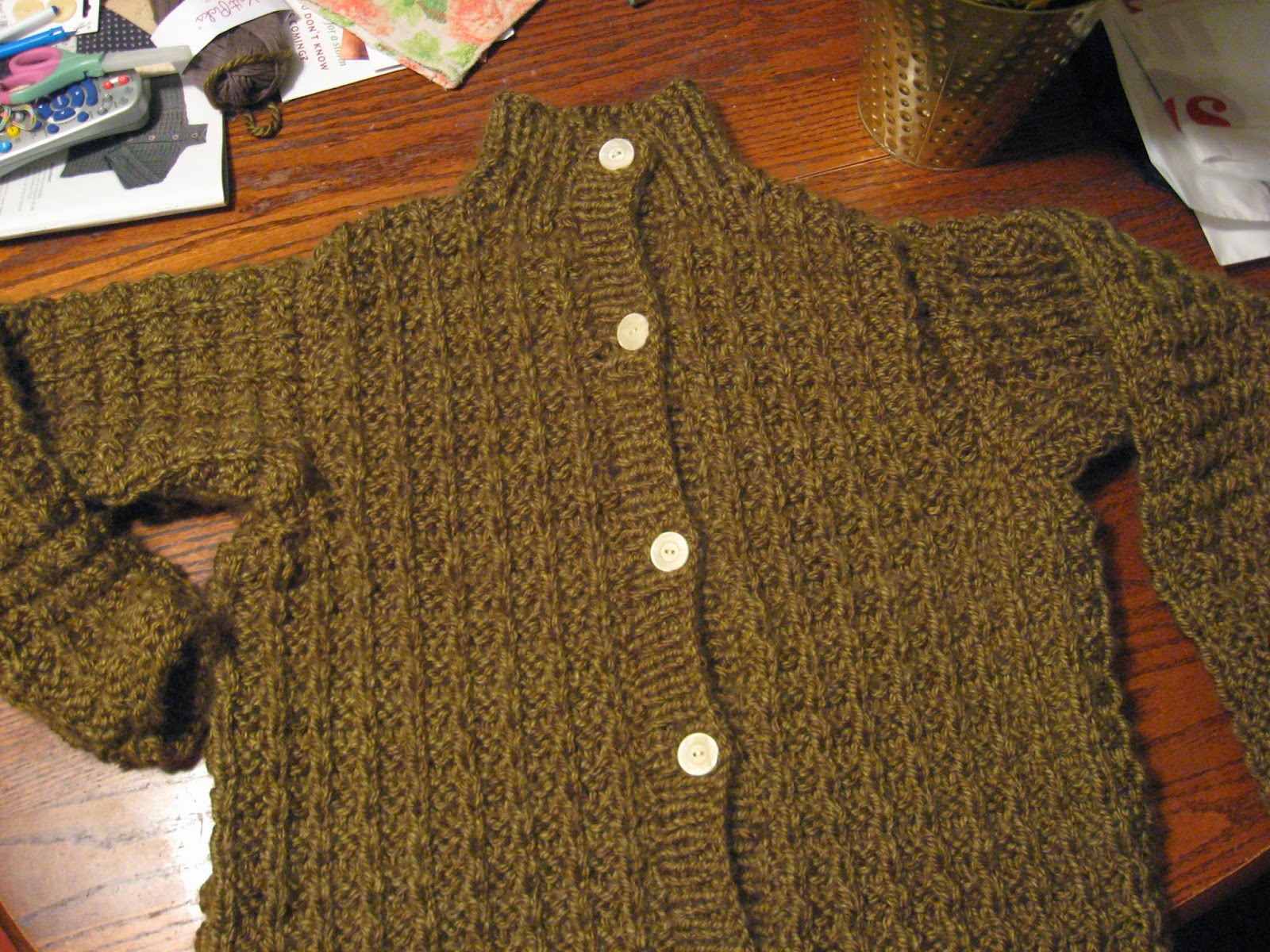 So, I have to finish only one small project that was meant to be a Christmas gift, and then I'm reasonable close to being caught up!  Hooray!  It feels good!
Posted by Quilting with Jannette at 9:09 AM No comments:

Here's another Christmas gift that I'm trying (rather frantically now!) to finish by Monday!  I found the pattern on Ravelry - it's called Pears the Elephant.  I love the original bright purple for the body, but that colour is no longer available, so I've gone more traditional, with a colour called Wallaby.  The yarn only seems to be available from KnitPicks - and I'm loving how it's working up! 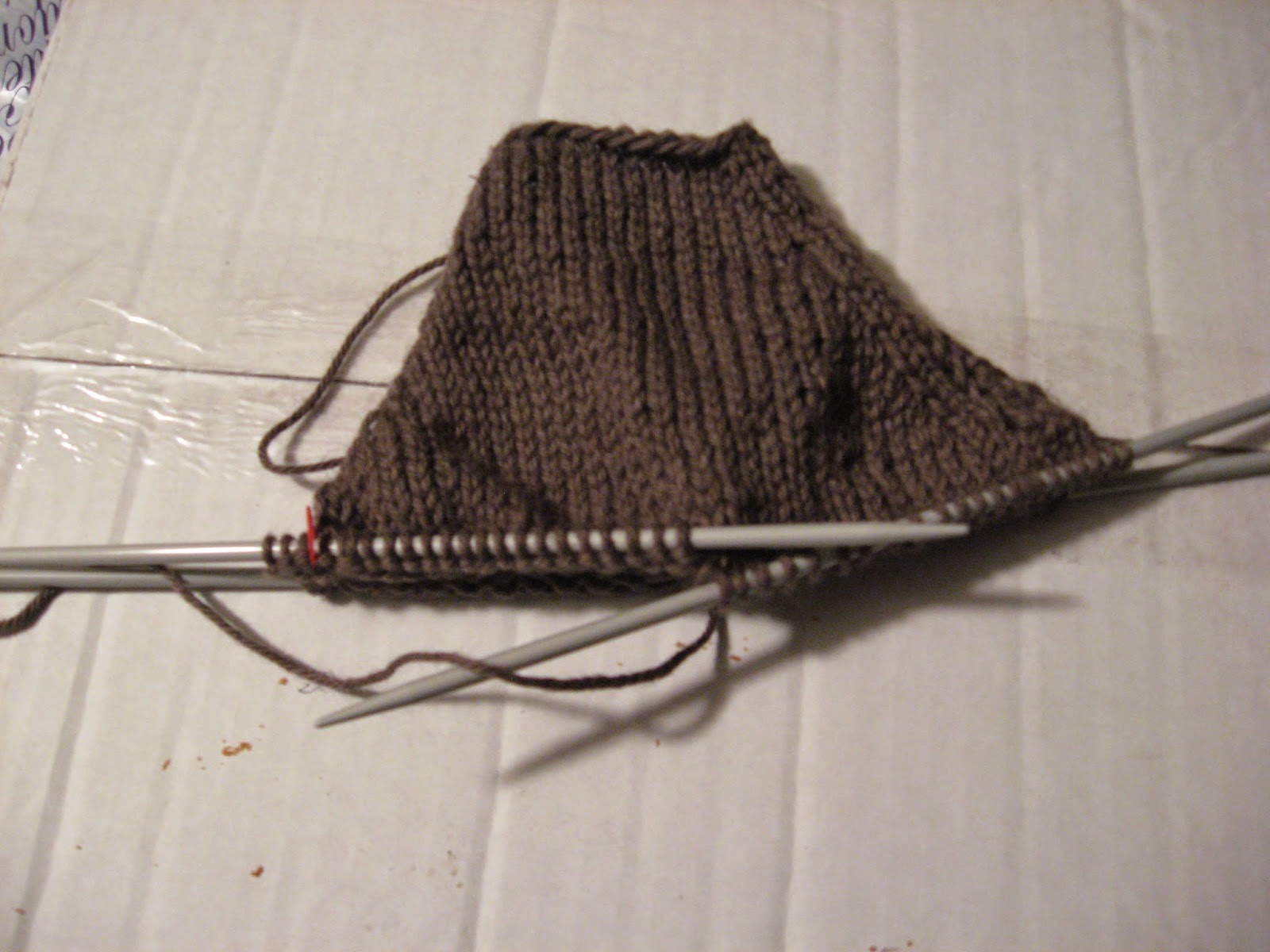 Obviously, I've got a way to go!  I'm hoping to have "her" finished no later than Sunday night - and the plans for tomorrow involve doing laundry and knitting - even shopping is on hold!  Keep your fingers crossed that I manage to pull this off!
I'm off to link up on Judy's page.
Posted by Quilting with Jannette at 8:12 PM 1 comment:

This is what I've been busy doing....

I still can't post a pic of my November "ALYoF" project, (check back on Tues.!), but there are other things I've been busily sewing while we're waiting for our first grandchild to make his appearance.
What baby / mom doesn't need a few burp cloths? and babies always need bibs, right?  So, I paired up some flannel fabrics for burp cloths, and some cotton and flannel for bibs, and gifted them to my daughter at her baby shower on Nov. 15th.  Of course, I totally forgot to take pictures, so I had to wait for my DD to send me some, and they have finally made their way to me!  Here are the bibs: 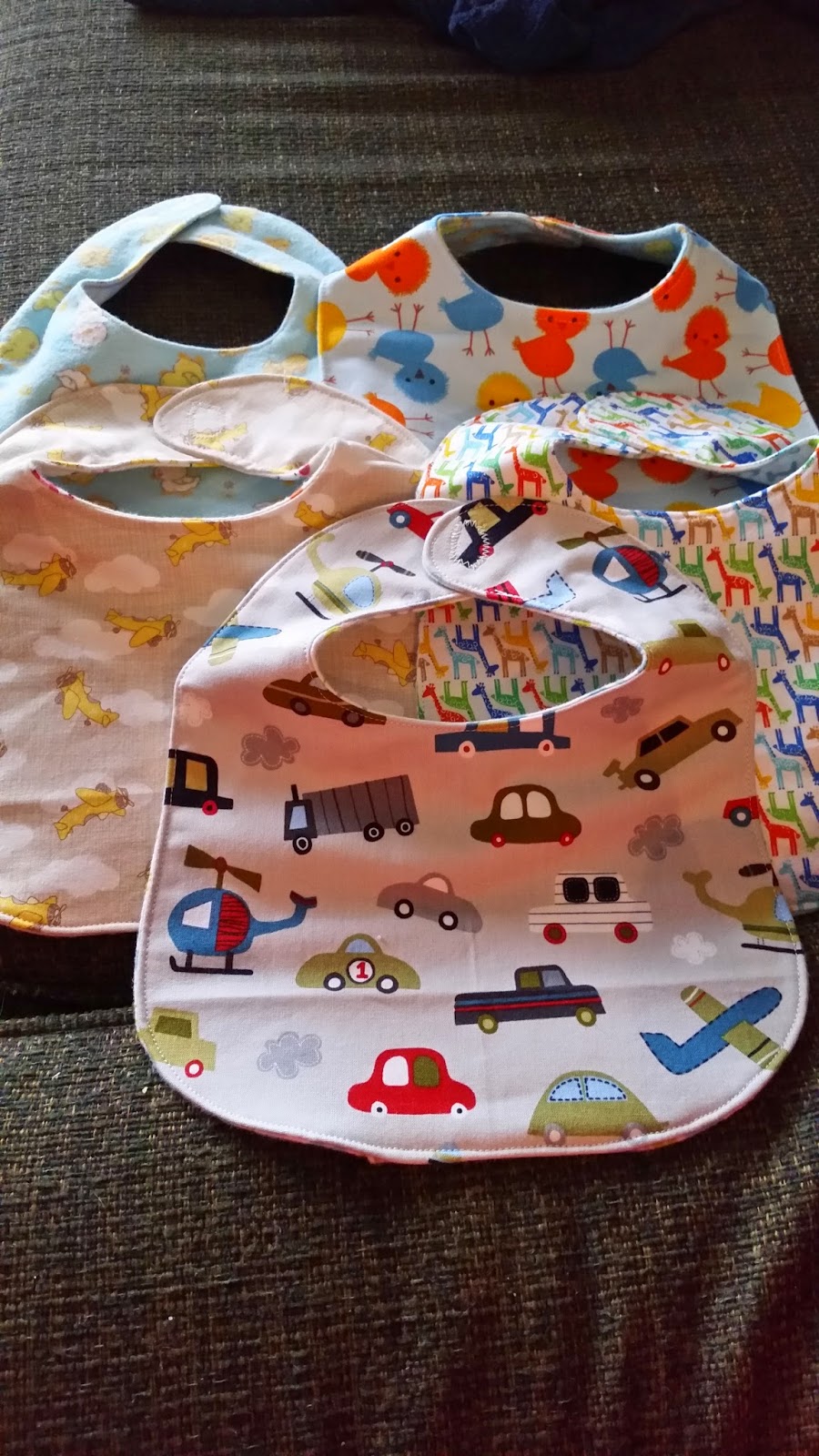 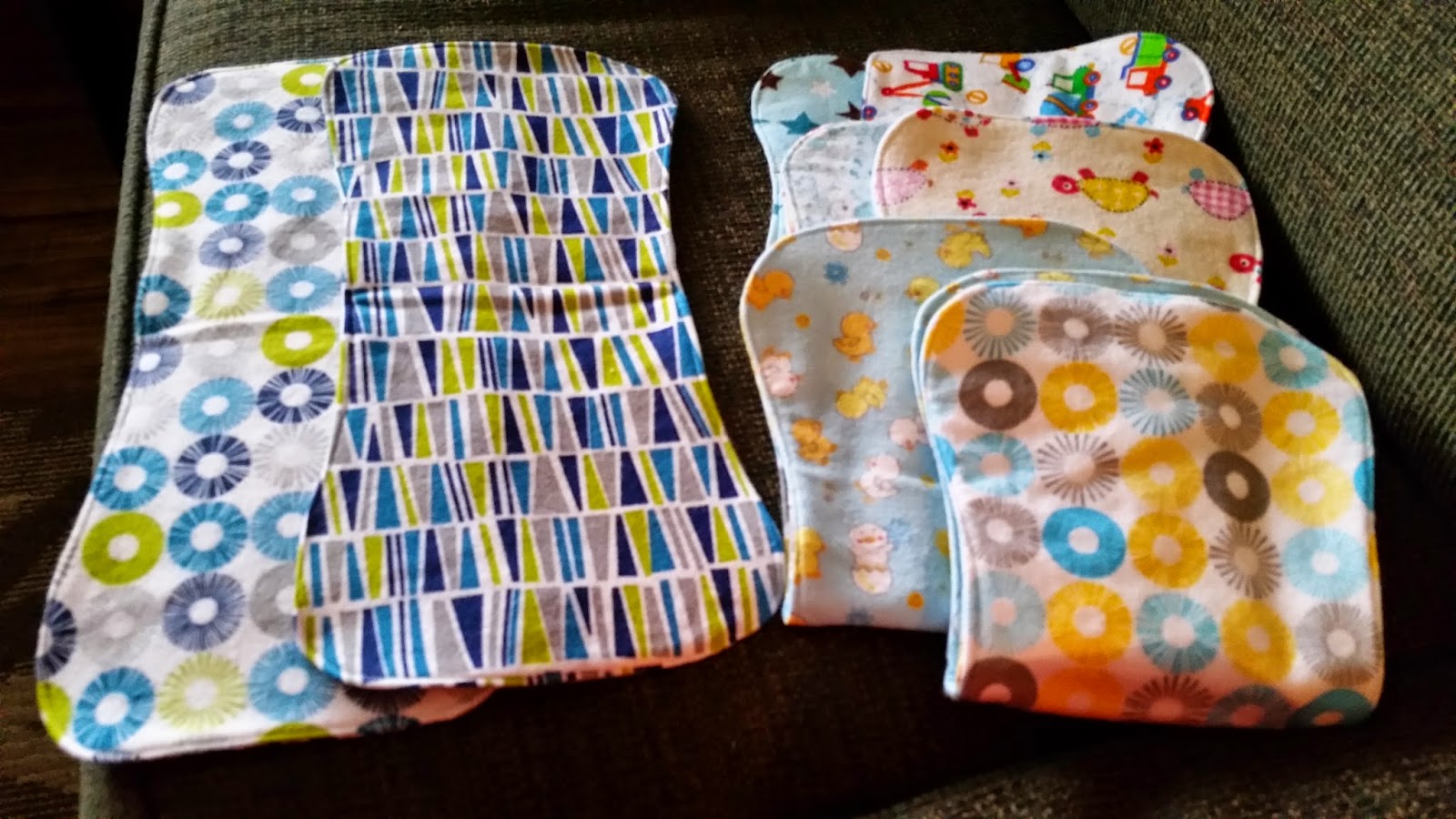 and the burp cloths:
Posted by Quilting with Jannette at 2:41 PM No comments: