You're going to be surprised!

It's that time of the month again - time to share the progress I've made on my "Lovely Year of Finishes" project.  You may remember that I decided to finish piecing the top of my Scrappy Trip Around The World - and I not only finished the top, I also managed to get all the quilting done! and the binding is ready to apply!     I had to decide though, whether to try to get the binding on, or to actually get the project photographed and blogged - and it's probably obvious which one won out!
I'm quite pleased with how it turned out - and I think that I have enough fabric strips cut to make at least one more TATW - but that will have to be a project for another month...  I have something very different in mind for my March project - I'll have it posted in a day or two....
Anyway, I'll leave you with the pic of my February challenge quilt: 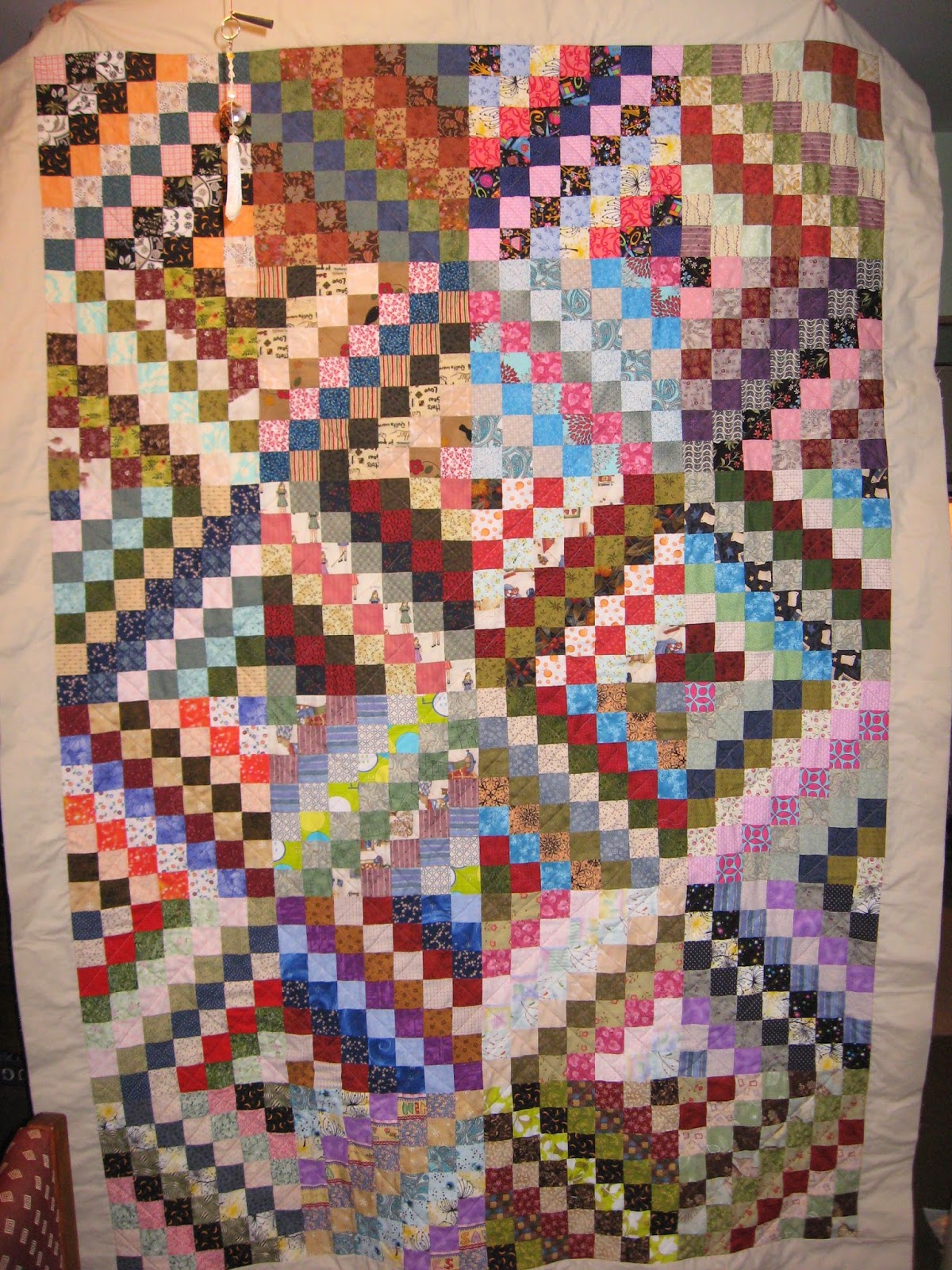 Posted by Quilting with Jannette at 8:26 PM 2 comments:

...and here I am again, with another knitting post!  Last week, I was busy knitting a baby sweater for our neighbour's baby - and that's still a work in progress - except there hasn't been any progress this past week...  It's been a busy week, and it's been REALLY cold, and I've been having a hard time staying warm.  I was really excited to find a pattern for knitted socks using worsted weight yarn - they'd be quick to make, and warm!  I had just bought some great variegated WW yarn, so I cast the socks on late Wed., and have managed to squeeze in some knitting time the last 2 days.  I'm happy to say that I have the first one done, and the 2nd one about 3/4 done.  The heel is done differently than I'm used to - with short row wraps, but it wasn't too difficult to figure out.  I had to pull up a video on grafting the toes - I don't knit socks often enough to remember how to do it.  The one side doesn't look that great, but it will be inside my shoes or slippers, so no one will see it - and it won't affect the warmth, so I'm not going to worry about it.  Here's how they look: 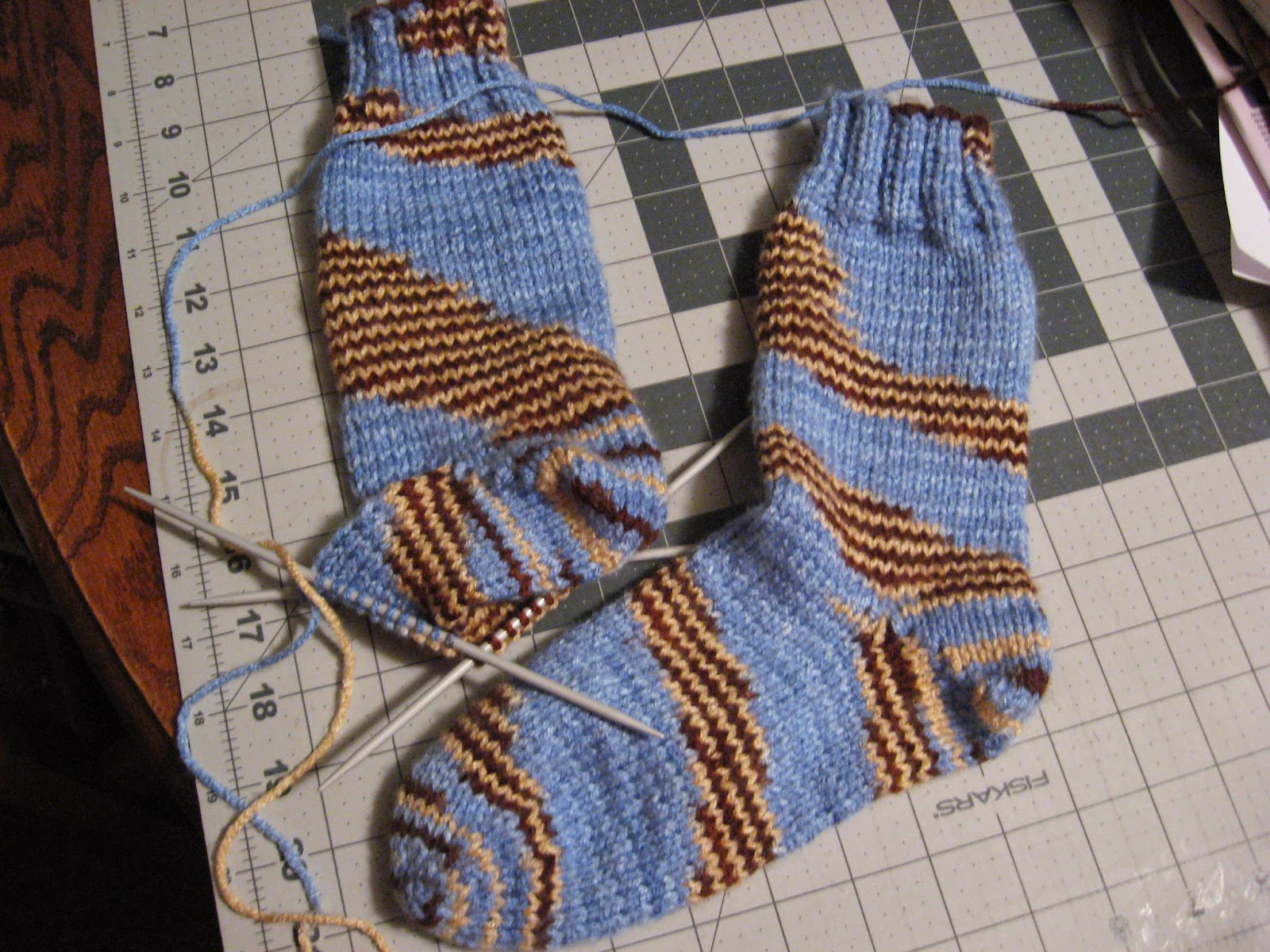 And now I'm going to try to finish the 2nd one before I go to bed!
Posted by Quilting with Jannette at 7:05 PM 2 comments:

On the Needles (and other stuff...)

I hope that you haven't fainted - this is my second post this month!  My life is starting to slow down, with the result that I'm actually able to work on some things that I want to do, rather than things that I have to do.  Well, I did do a few things that I sort of had to do, but they were fun things, so they don't count!
But first - my "On the Needles" report.  Our neighbours just had their first baby a week ago - a little boy - and I am frantically trying to finish a sweater that I had started before Christmas.  The yarn and pattern are kind of gender-neutral, so I didn't need to find out what the baby's sex was, but it helps to know if I'm knitting for a Billy or a Susie...
I found this free pattern on-line, and had 3 balls of the called-for yarn (now discontinued), which is just enough to make the largest size - 22" if I recall correctly.  I have the front almost ready to divide for the neck, and the back is almost finished too; here's the pic: 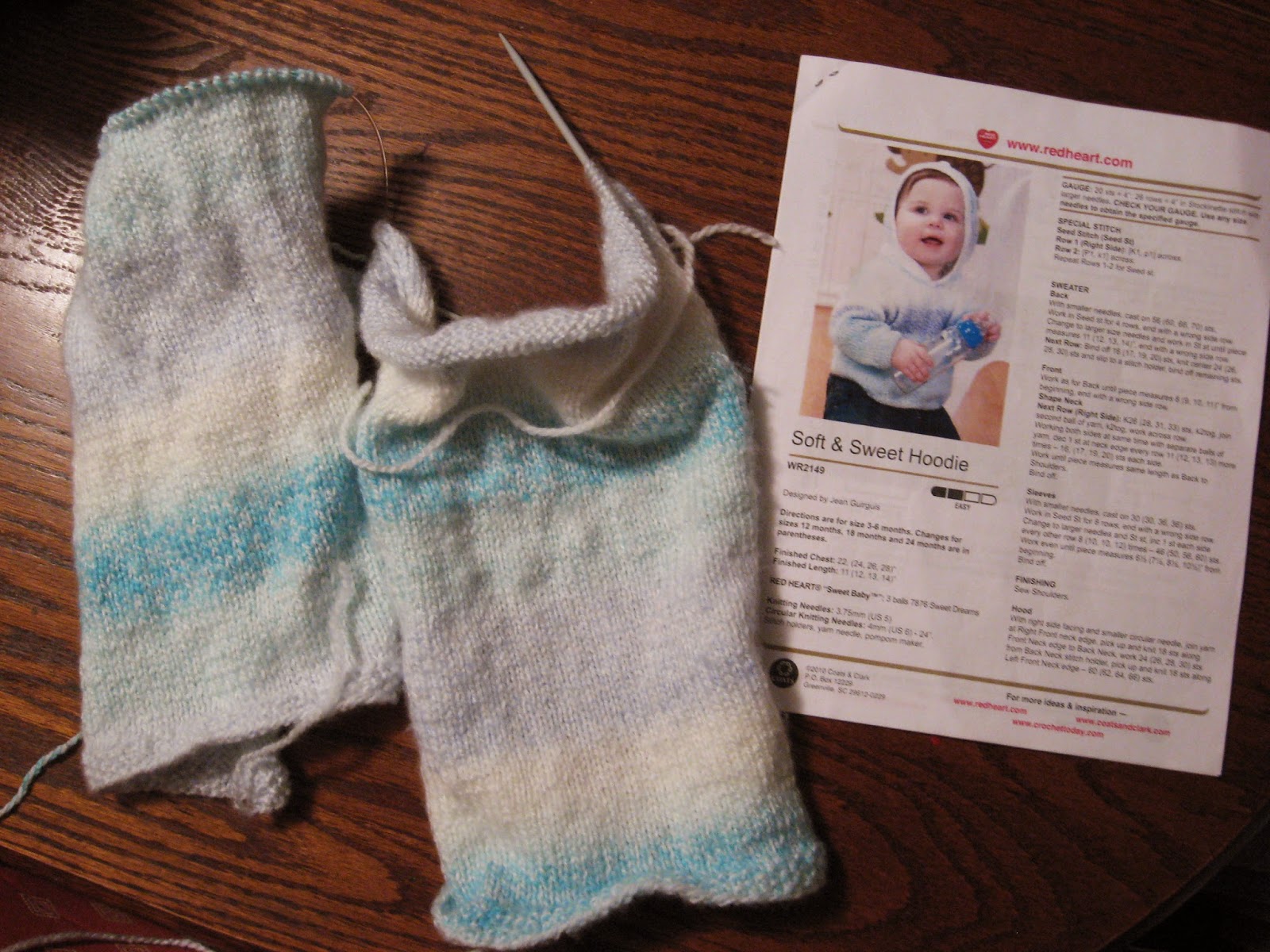 I'll probably do the sleeves next, and leave the hood for last, just in case the yarn isn't going to make it all the way - I can always alter the pattern then.
I also have 2 finishes for you - these were gifts, and I was hoping that they'd be in the hands of the recipients before I posted them - first is Pears the Elephant: 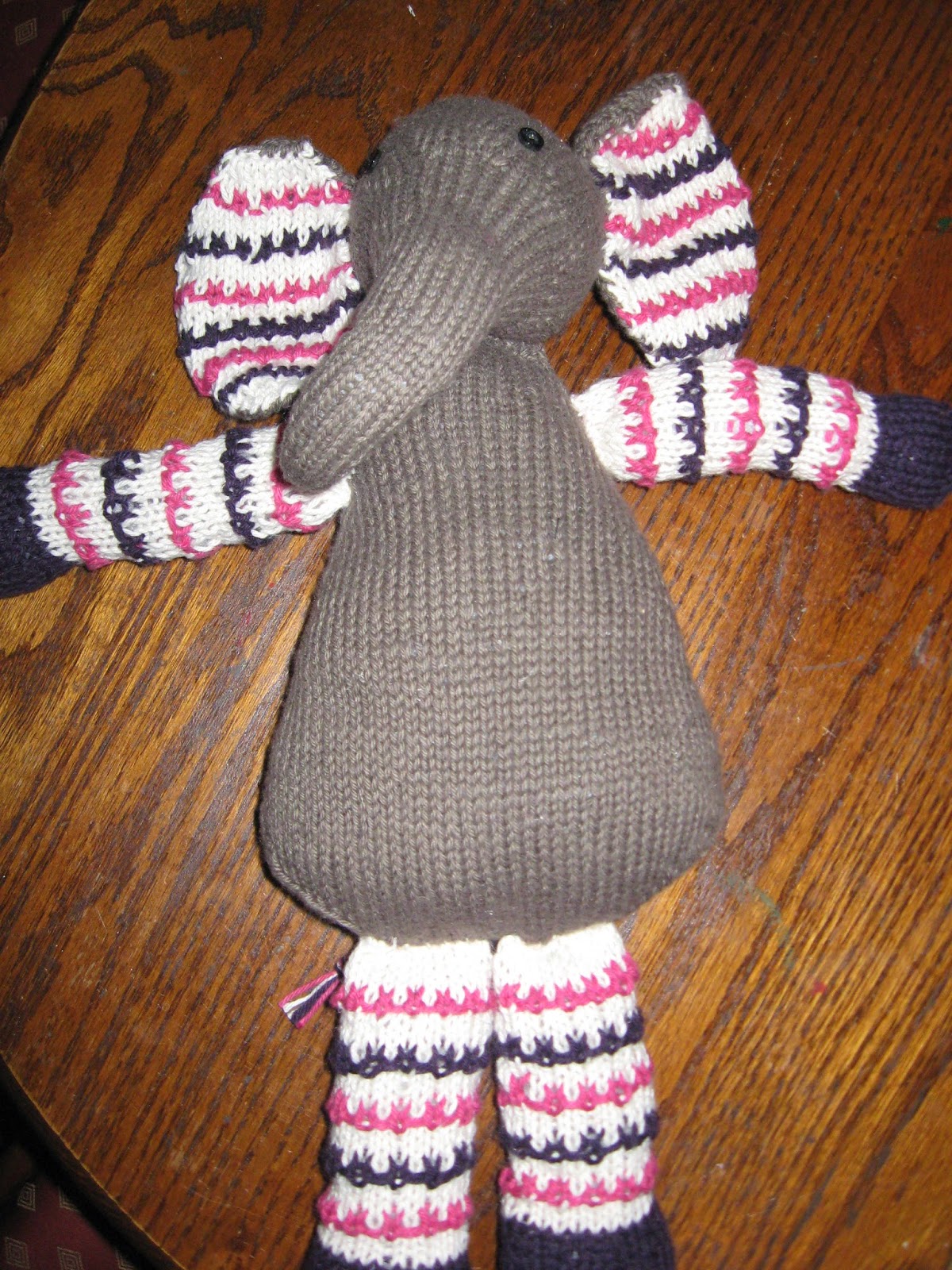 She was meant to be a Christmas gift, but the knitting ended up being a little more of a project than I was expecting, so she was finished up Tues. morning, just in time to go to her new home.  Next up is the baby sweater that my new grandson was supposed to wear home from the hospital.  It was supposed to have a little hat too, but there wasn't enough yarn to complete it, and the yarn is discontinued...  Then I realized that the pattern was for a 6-month old - MUCH too large for a newborn!  It will be ready for wearing either this spring or in the fall. 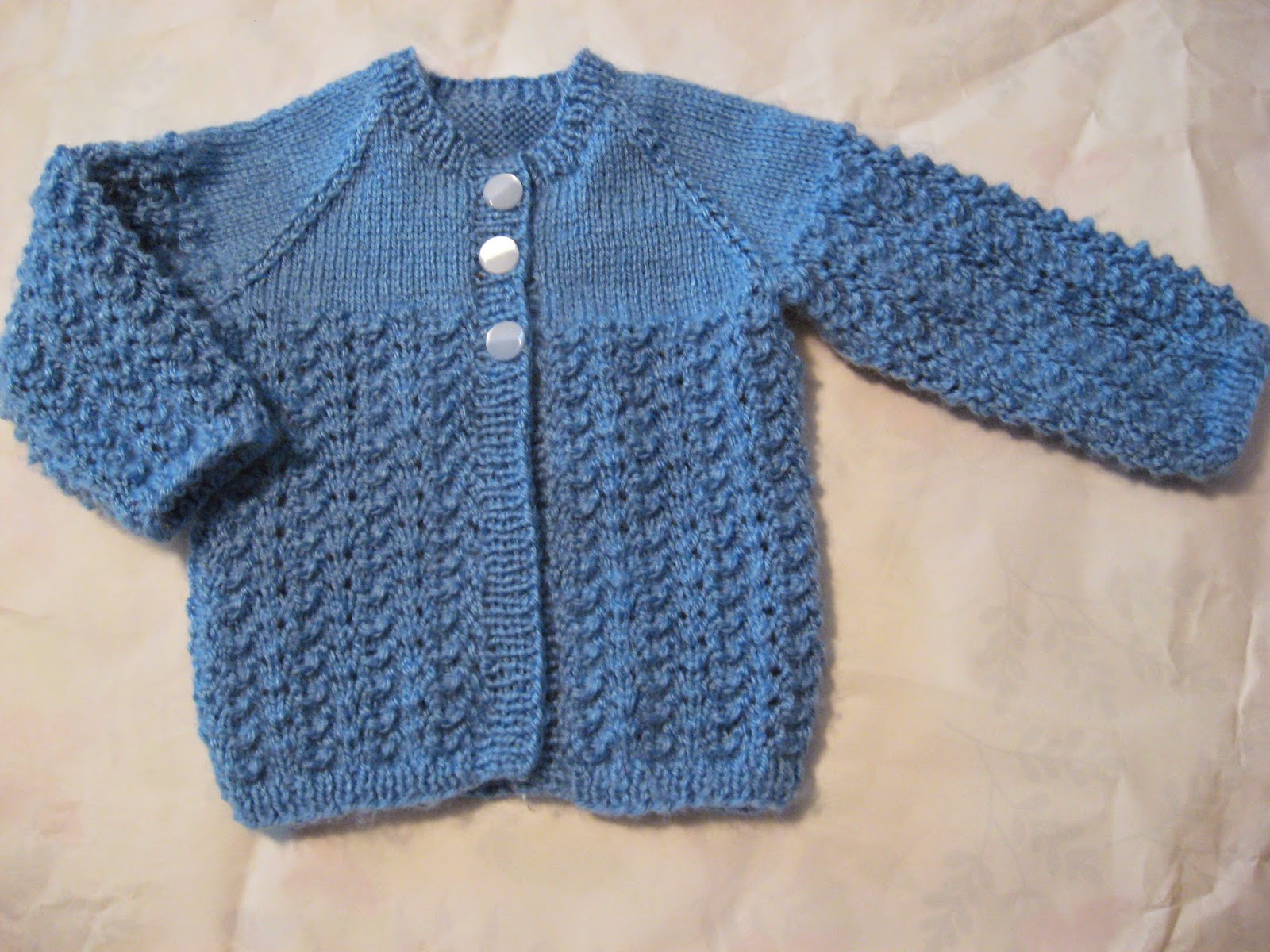 And finally, I had mentioned in my last post that I had sent some quilt blocks to my friend Cathy, for a swap that we're doing.  She let me know that the blocks arrived safely, so I may share them here now: 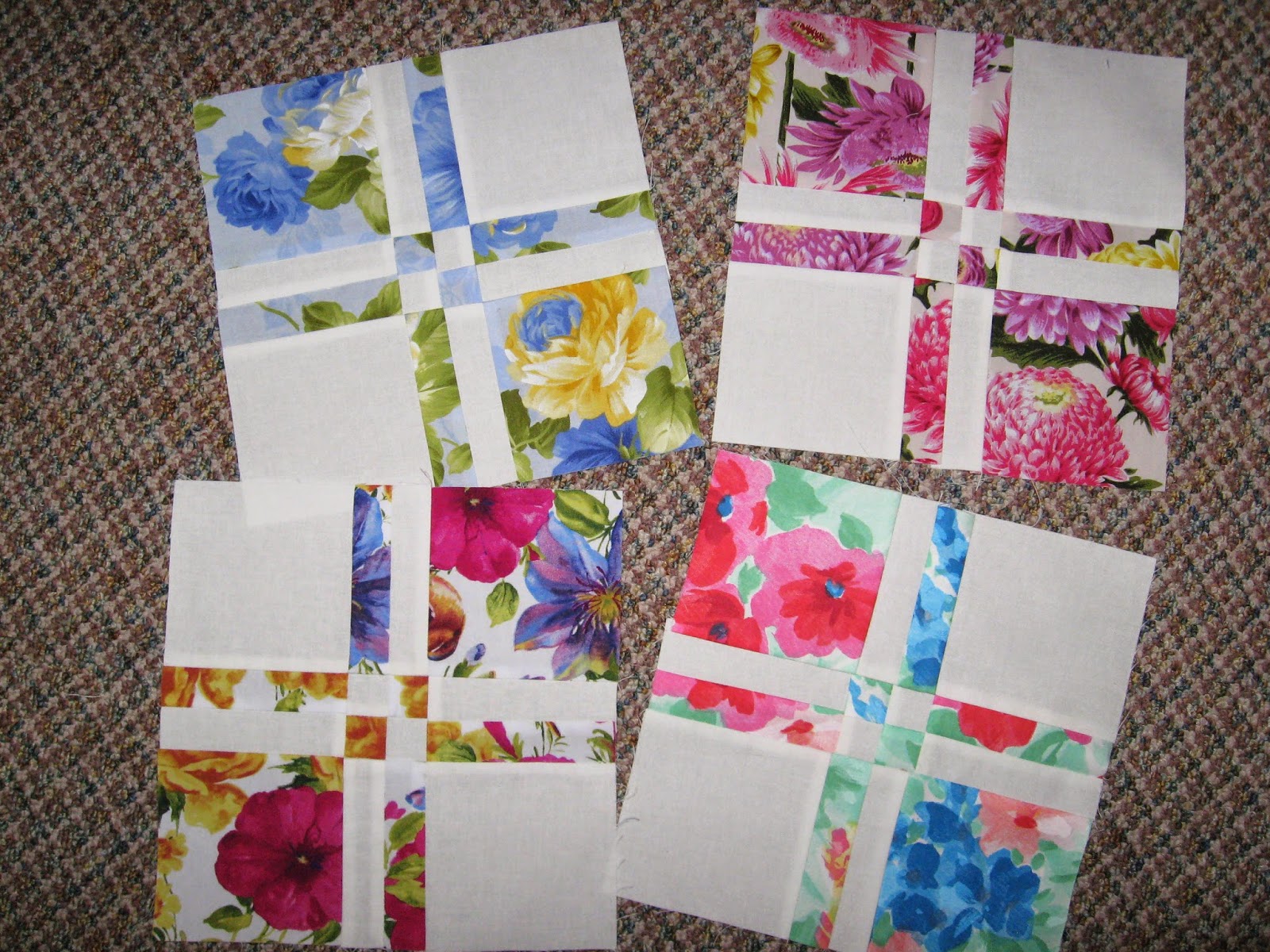 We're doing a Disappearing 4-patch quilt with large-scale florals, 4 per month for each of us, probably for 10 months.  I didn't have a really big floral stash, but I've found some fun ones since we started, and now I've spent part of the afternoon cutting florals for the next 2 or 3 months - do you think I'm getting excited about this swap?  I sure am!!
Posted by Quilting with Jannette at 6:37 PM 3 comments:

Not that I've really been gone - just have been so incredibly busy with too many non-sewing things for pretty much the whole month of January - and, to tell you the truth, February isn't starting off much better!  As a result, I got very little done on my Jan. ALYoF project...
So, guess what my Feb. goal is going to be? yes, you're right - I'm going to try (again) to get some scrappy trip around the world quilt tops done.  I have made some progress: 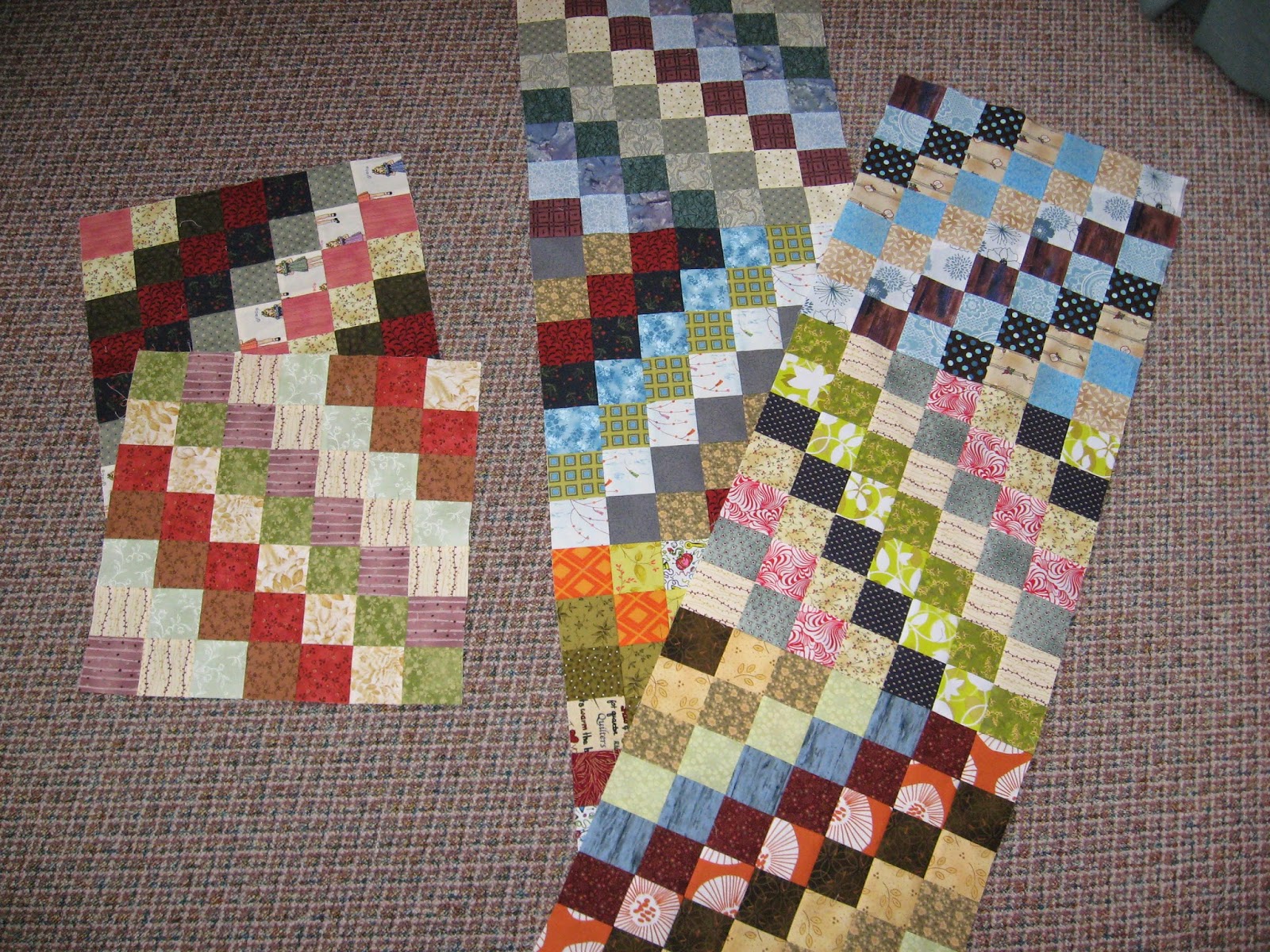 I have more blocks made, and I have also started sewing some strips together.  The sections shown here are 3 blocks wide - and they should be at least 5 blocks wide by 7 or 8 blocks long.
I'm also planning to take part in the Rainbow Scrappy Challenge over at Angela's Soscrappy site again this year - I managed to cut the blue scraps for January's blocks, but got no farther than that.  I'm hoping to do Bonnie Hunter's Scrappy Sister's Choice blocks for my rainbow scrappy project blocks.
One final thing that I'll be doing on an on-going basis this year is a large-scale floral Disappearing 4-Patch swap with my friend Cathy.  I got my first set of 4 blocks made up and sent to her, but I don't think that she got it yet, so I can't share them here yet.  I got the blocks she made in yesterday's mail, and they look great!  It will be interesting to see if we ever use the same fabrics - we don't live that far apart, so it's possible!
Now I'm off to link up on Melissa's site.
Posted by Quilting with Jannette at 1:18 PM 3 comments: