Right - it's September 30th today, and I almost forgot to blog about my ALYoF project.  I chose to finish my Christmas wall-hanging.  I used my Twister tool to make the Christmas tree - the coloured sections are supposed to represent either ornaments or coloured lights, and the various green fabrics hopefully mimic the different shades found in a real tree (although I know real trees don't come in most of the green colours that I used...).
I did some Stitch-in-the-Ditch quilting in the cream background blocks.  Instead of using the same technique for the tree, I used a gold rayon embroidery thread, and stitched "garland" back and forth throughout the tree, and even used a decorative stitch on my sewing machine to make a little "baubles" every so often along the garland.  I used a great red and white diagonal stripe for the binding, hoping to evoke thoughts of candy canes.
Here's the completed project - ready to be entered in the fair this weekend! 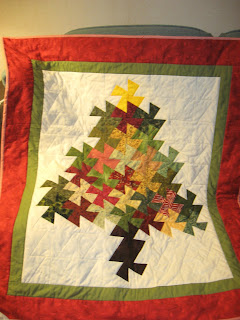 I'm linking up to Melissa's site.
Posted by Quilting with Jannette at 8:53 PM 1 comment:

On My Needles report for Sept. 18th

I know, I know, it's not Sept. 18th anymore - I just haven't had time to sit down to write this post...
I've been progressing with my baby sweater set.  The body of the sweater is almost complete - I just need to knit the button bands and the neckband.  The sleeves are more than halfway done - and then I have to knit the bonnet to go with it. I've so enjoyed knitting this set!  The yarn is a light double-knitting weight (Mary Maxim Baby's Best), and it's working up fairly quickly.  I still think that the decreases in the bodice are oddly done, so I'll probably do something different the next time I knit the set, but there will be a "next time"!
I'm going to link up to Judy's On the Needles post.
Posted by Quilting with Jannette at 9:09 AM 1 comment:

How can it already be September 7th?  In just over 2 weeks, it will be Sept. 25th - and then just 3 months later it will be Christmas, and I haven't even had enough summer yet!  I know that I lost some time in April, but I just don't know how the rest of the year has rushed by so quickly.... (the weeds in my garden may have had something to do with it though...).
But, time apparently marches on, and I have projects to finish - and soon!  September's project is one that I NEED to have done by Sept. 23rd.  Fair season starts on Sept. 24th, and I need to enter a wall-hanging.  I almost had this one done for last year, but ran out of steam just a week shy of entering it.  I put it away, fully intending to finish it in time for Christmas, but that didn't happen either.  Now, fair season has come around again, and if I don't get it in this time, I won't have another opportunity to do so.  It just needs the quilting and binding done, so not a huge time commitment. 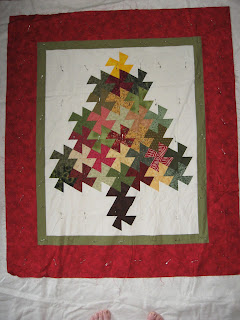 I've been looking for some seasonal wall-hanging patterns for a while, and I saw this pattern shortly after I got my Twister tool.  I have a short hallway, and it needs a focal point at the end of it - and this is the one that I've chosen for Christmas.  I'll probably just do some kind of SID quilting - I'm not confident enough in my free motion quilting yet, and I don't want to distract from the "tree".
So, 2+ weeks to quilt and bind a simple wall-hanging - I should be able to get it done, right?  Right!
Posted by Quilting with Jannette at 2:18 PM 1 comment:

I think that this has to be some kind of a record - two "On the Needles" reports in 2 weeks!
I REALLY love this little sweater!  Now that I've got the pattern figured out, I'm on a roll.  I don't have a lot of time to knit these days, between canning, and quilting and visiting my dad a few times a week, but I've managed to sneak in a few minutes here and there.  This is where I've left off - sorry about the shadow. 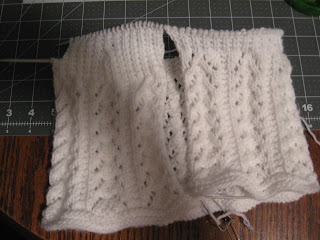 I'm finally working on the (right) bodice section.  The little puckery spot looks a bit odd, but it's knit according to the instructions...
I just realized that I could be knitting the left side at the same time - that way, I'm sure to get the shaping for the neck and shoulders to match.  When I get to the decrease point on the left side, I'll see if it's as apparent as the right side - and if so, I may leave it as is, or try to find a less obvious decrease.
So, now that I've got this much done, I'm eager to see the set completed - and I'm hoping to be at that point by next Friday's report deadline!  (I'd cross my fingers, but it will be a little tricky to knit that way...!)
Posted by Quilting with Jannette at 7:49 PM 2 comments:

What happened to that August project?

Yeah, I was wondering the same thing...!  I bit off far too much - I was sure that I would be able to manage my lofty goal, but that was before I promised to help out a friend, delivering his newspaper route for him while he took some holidays.  I then also accepted another route, which took up another week.  It's done wonders for my bank account, but didn't leave me much time for quilting projects!
I did manage to get the top of my (large) quilt done - just didn't get the quilting and binding done.  Maybe next month?  I have a lot of smaller projects to do this month, between quilting, and knitting and even some sewing.  It's also "fair" month - and I'm entering projects in 2 local fairs, and I'll be judging at a third one.
I'll post my next project in another post - and leave this one primarily for showing my completed quilt top.  Here's the picture: 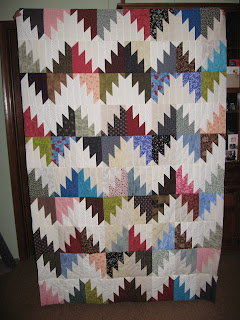 I really like the "zig-zag" look of this quilt!  I've made a "Scrappy Mountain Majesties" quilt before (in my pre-blogging days), but used a different setting for it.  I think I prefer this one!  (If I can find a picture of the other one, I'll share it here).
Finally, I've got quite a few blocks left over, so I may just end up making another SMM quilt - I'm not sure if I have enough to make one this size again, but all sizes are needed by the organization that this one is going to, so it will be gratefully accepted.

.
Posted by Quilting with Jannette at 5:18 PM 3 comments: