I finished my "Lovely Year of Finishes" project, just before the absolute deadline - BUT, it's done!  I missed a few days last week, and there are always the little things that come up that throw a wrench into the plans - all reasons that might have contributed to this - or maybe, I just pick projects that are a little too complicated to finish in the time frame of 4 weeks.  Of course, starting a new project in the middle of this month probably didn't help the cause any either - and I probably should have 20 lashes with a wet noodle for trying to pull that off.  But it's done....
My April project was to complete my quilt top using the "Disappearing Pinwheels" (free) pattern from the Missouri Star Quilt Co.  It's meant to be made with a patterned layer cake and a solid-coloured one too.  I didn't realize that I had a layer cake - I could have saved a fair bit of time using that!  Instead, I used 2 sets of 8 or 9 FQs from the Brooklyn Heights line by Kitty Yoshida.  I picked those 2 sets up about 5 or 6 years ago, with grand plans for the fabrics, but after I washed them, I realized that they really wouldn't work, and set the fabrics aside - until now.  I ended up getting 2 - 10.5" squares from each of the FQs, and cut enough white squares from my stash for the other half of the block.  I got the center assembled, bordered the entire quilt with more white scrap fabric, and managed to cut a few 1.75" strips from each of the prints for the outer border - and there's enough strips left over for the binding.
I'm really tired after all that - so I'll share the picture, and post my finish on Melissa's site before I crash for the night.
I should be back in a day or two with my (hopefully!) much easier project for May! 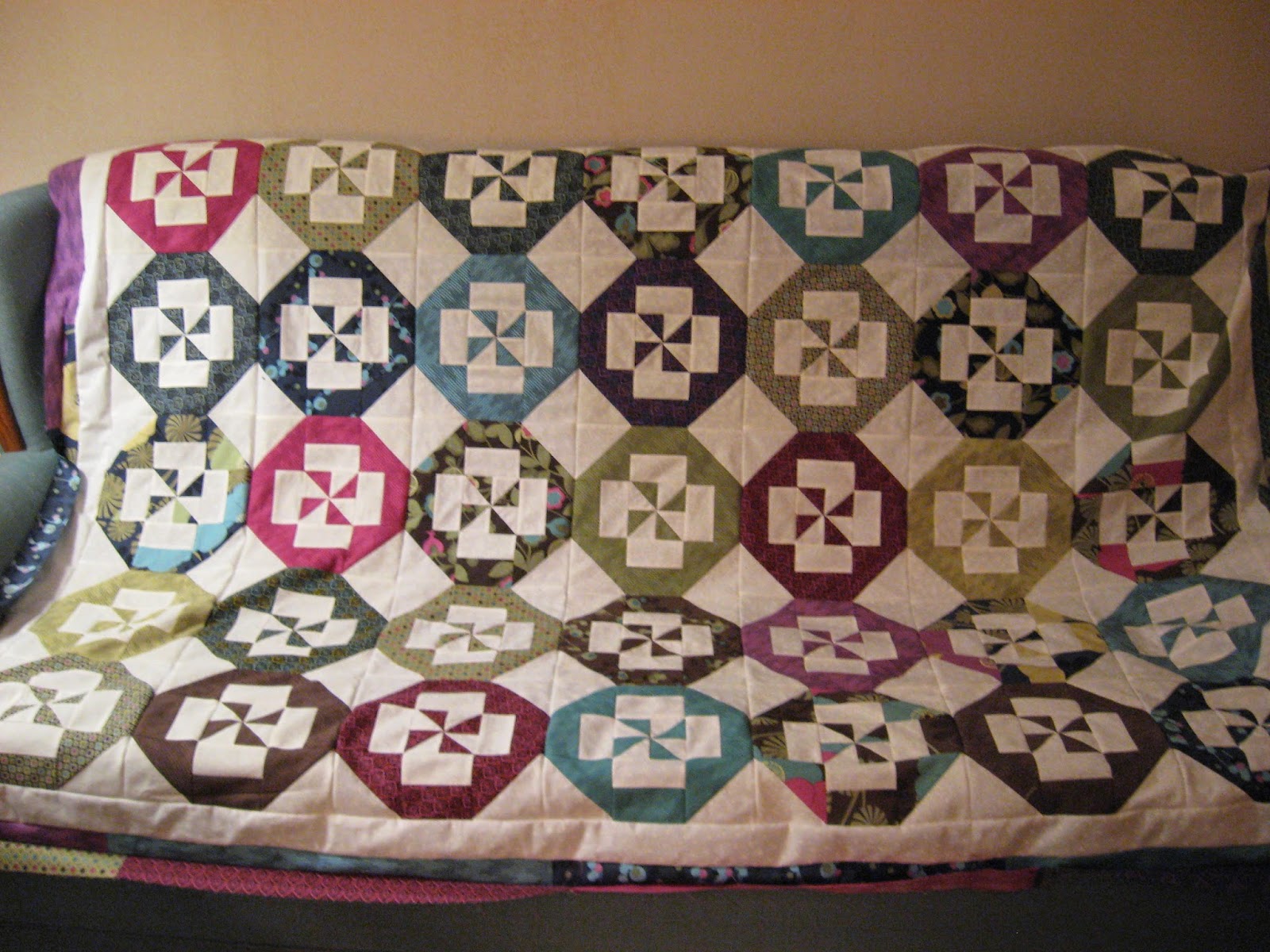 Posted by Quilting with Jannette at 11:00 PM 5 comments:

I must be getting old - the days and weeks just seem to be flying past at warp speed - and I'm not!  I only had my 5 Rainbow Scrap Challenge braid strips to finish for April - they've been cut and ready to sew for at least 2 weeks - but it took until today to finish that part of the project.  As I've mentioned before, I don't have a lot of purple fabrics, so these are the same 6 or so fabrics that I've used for my other RSC blocks.  Here are the strips with April's contribution: 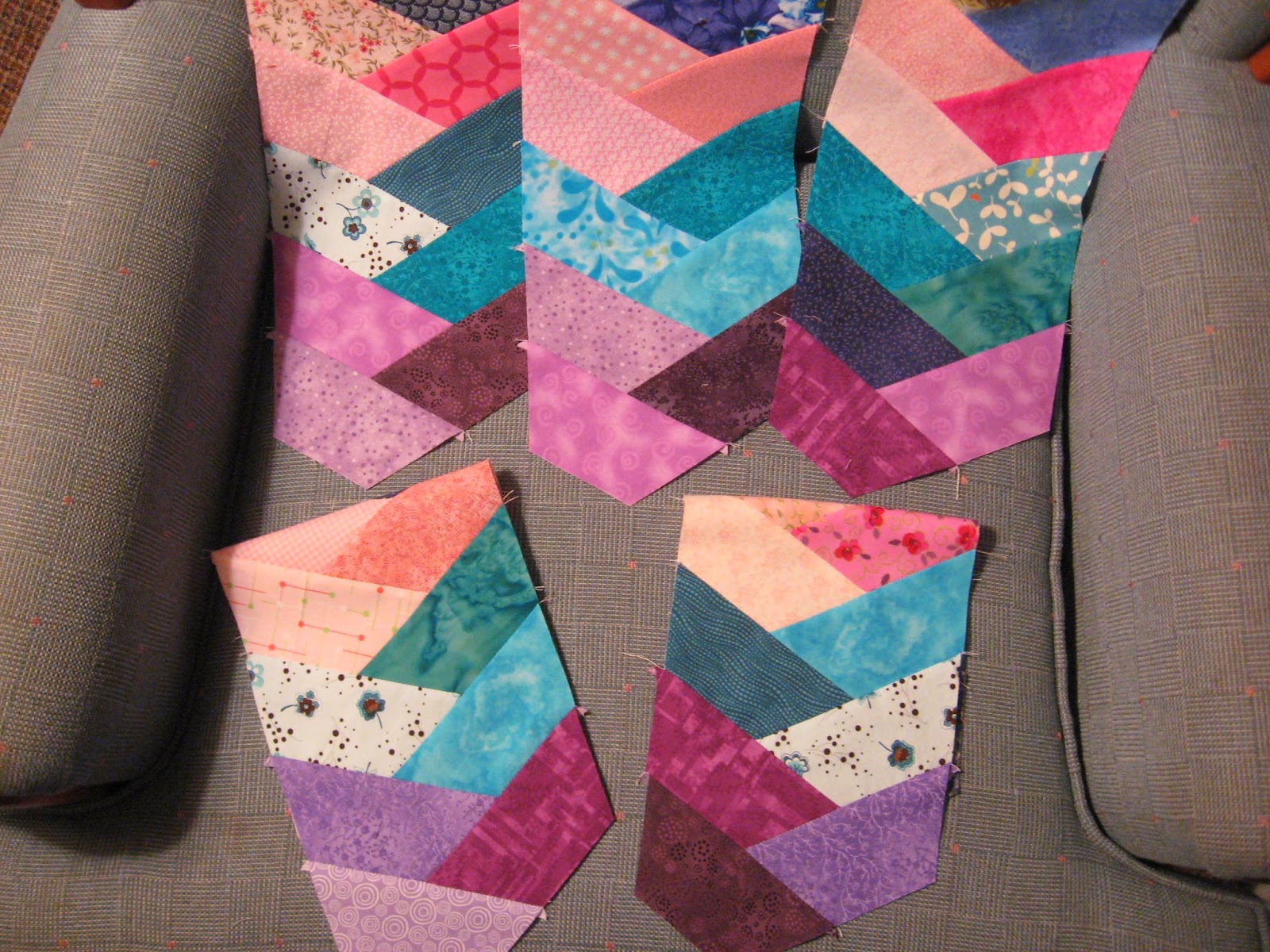 I folded the bottom 2 strips - it's getting harder to catch all of the strip in one photo!

And then, continuing the purple theme, I made a purple ("Perfect Plum") birthday card for a lady at church - her birthday falls a few days from now, but I'll only see her tomorrow, so she'll get her card then.  I didn't set out to make a purple card, but it worked out perfectly!  Here's what I mean: I'm not sure if I'll get my ALYoF project done for Wednesday - I'm working hard to make it happen! Having the 'flu for a few days this past week didn't help - but I had some sewing time today, and a few more blocks were assembled - including 1 or 2 purple ones!  (Do I sense a theme? LOL)  You'll have to check in here on Wed. to see if I was successful.
Thanks for stopping by!
Posted by Quilting with Jannette at 8:28 PM 5 comments:

Saturday's sewing and a card!

I know, I'm a few days late, but, better late than never, right?  I worked on my second set of rainbow scrap blocks, in April's colour, which is purple.  These are my Kickin' Stash blocks, and yes, I found the fabrics that I mislaid last week - hooray!  I'm not going to make you beg - here's the picture: 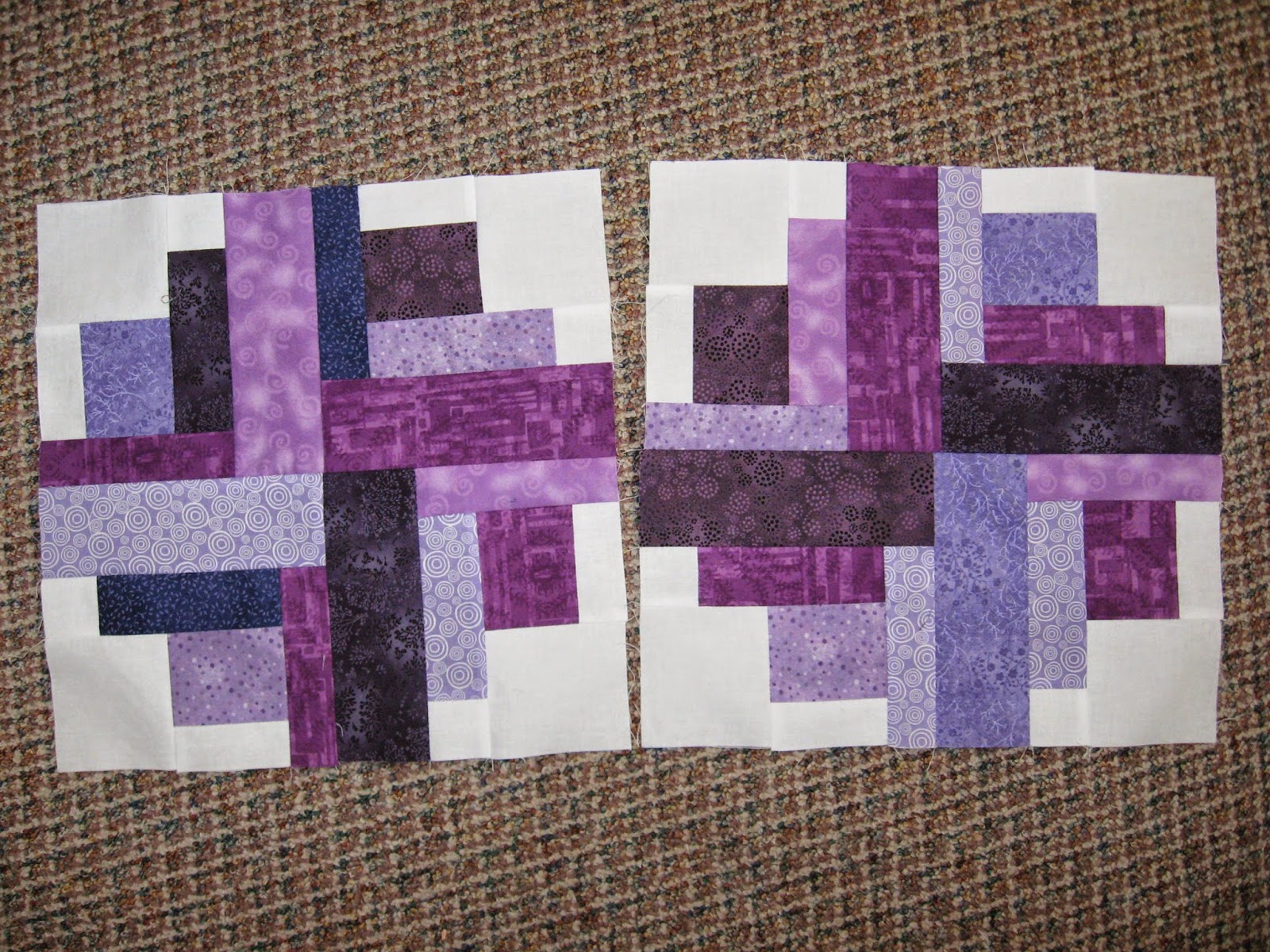 I'm starting to get excited about my finished quilt!  Angela has chosen some really great colours so far, and I can't wait to see what the final product will look like!
Then, as if I hadn't done enough work on Saturday ;-), I also took a few minutes (okay, half an hour!) to make this birthday card for my aunt.  Two different embossed panels, some ribbon, a little buckle, and, of course, a label with happy birthday on it, and it was ready to go.  I hope she'll  like it! 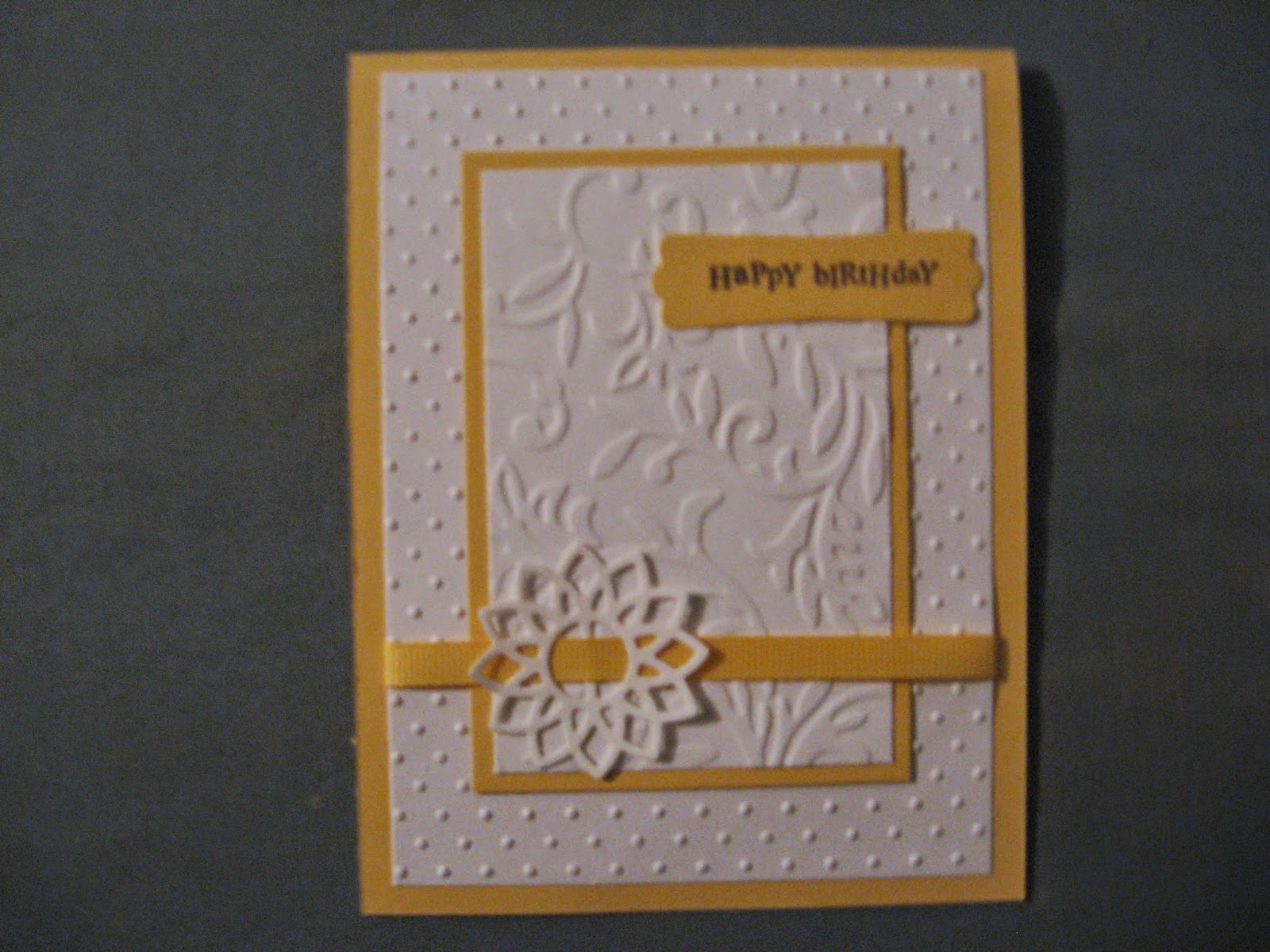 Posted by Quilting with Jannette at 9:09 AM 2 comments:

I have a problem.  No, seriously, I have a PROBLEM.  I love making quilt tops!  It's so fun to watch all those random bits of fabric come together, one bit at a time - and then, suddenly, you have a completed quilt!  Well, a quilt top that is.  It's not really a quilt until you have the backing and batting and quilting stitches in it, and the binding sewn down front and back... and that's where my problem lies.  I LOVE making the tops - they're pretty, and fun to watch as they come together - but the backing and batting just don't give me the "rush" that I get from completing a top.  So, I end up with a pile of tops, and there they sit, until I have a deadline to finish one of them.  I got a new sewing machine a few years ago that makes quilting them much easier, but even that hasn't made much of a dent in my pile of tops.  So, you probably know where I'm going, right?  I'm going to post a pic of one of those tops, and tell you about getting it quilted by month's end - but you'd be wrong!  I don't have that kind of motivation today....
So, what am I going to do this month?  I'm going to finish the blocks that I need for my disappearing pinwheel quilt.  I bought 2 packages of fat quarters a few years ago, hoping to make a Swoon quilt with them, but when I pre-washed them, most of them were just shy of being the right size to get a Swoon block cut from them.  They'd been put in a box, and were almost forgotten, until I switched my sewing room to the spare bedroom downstairs and they reappeared.  The pieces are big enough to get 2-10" squares cut from each of them, so I hope that it will make a decent size for a quilt.  I'm not sure what I'll use for the pinwheel border - I'll have to see what I can find in my fabric bins!  Here's a pic of some of the pinwheel blocks: And, once again, I'm aiming to finish this quilt top before the 26th of the month - I hope to be successful this time!
Posted by Quilting with Jannette at 1:21 PM No comments:

Today is the first Saturday in April, and that means that it's time to reveal the new colour, and also my first blocks using that colour.  Angela has chosen purple for April, which is very appropriate seeing as Easter falls later this month, and purple can symbolize pain and suffering, but also royalty - all things connected to Jesus' death on the cross for us.
I started the month with my X and + blocks.  I didn't have any purple scraps, or maybe I just couldn't find them, so I ended up cutting up some fat quarters.  Some of my purple fabrics are quite dark, and they show up almost as black. Rest assured, they are purple!  Here are the first 2 blocks: 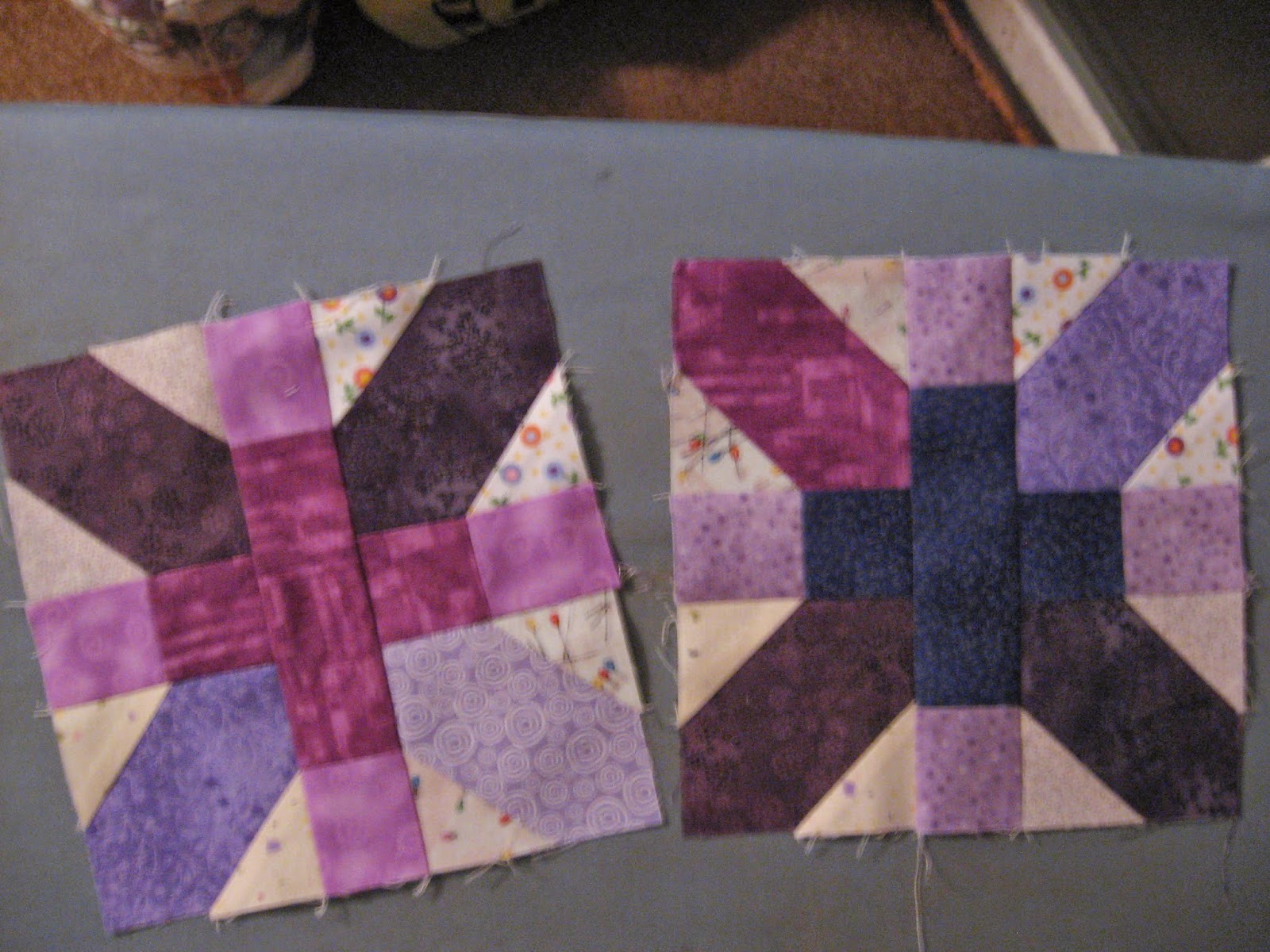 I even managed to find a few fabrics with bits of purple in them, to use for the light contrasts for the corner blocks!
I've also cut the purple strips for my Kickin' Stash blocks, but I've temporarily lost my white fabric for the balance of the blocks, so those blocks will show up later this month....  I need something to do next week!
Posted by Quilting with Jannette at 9:27 PM 4 comments: