I realized that now I can finally post all of the things I've been busy with this month - mostly knitting, but some quilty things too.
The socks that I was working on have been completed - I knit a pair for both of my daughters for Christmas.


And the pair knit for daughter #1 - modeled so well! 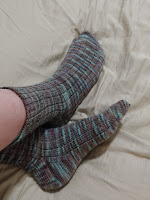 Then there was the hat for grandson #2...   His older brother has a lighter blue version, and we couldn't have just one hat for 2 boys!

And I finished up some charity quilts - mostly tops that just needed quilting and binding.....

And our year ended up with family time, some planned, some very unexpected, as my father passed away rather suddenly.  He was 89, and longed to be with mom...  He's rejoicing in heaven with her now!

Posted by Quilting with Jannette at 8:16 AM No comments:

These UFOs have seen the light!

I've been keeping occupied lately by moving - moving from our large, bright, warm living room, to my (much smaller, colder, darker) sewing room.  We had friends from New York visiting for a few days last month, and we really needed to be able to sit in the living room in the evenings.  But, just bringing down all the mess from the living room wasn't going to work - I was already having trouble finding things in my little sewing room space, and adding more "stuff" wasn't going to do anyone any good.  So, about 2 weeks before our guests arrived, I started sorting through the piles, and half-made blocks, batting scraps, etc. trying to make some sense of it.  Some of the things have been hiding well for almost the 10 years that we've been living here, and I couldn't see the point of holding on to them any longer.  Three trips to the thrift store later....  I could finally see some room for all of the projects coming downstairs - and then I decided to relocate some of the furniture too.  My big cutting table went out, and two smaller tables moved in.  My sewing table also found a new home, as I'll be sewing on one of the 2 tables that moved in.  It's snug, but workable - and it's still a work in process, but there's a light at the end of the tunnel!  As a reward for all my hard work, I decided that I could spare a few hours to quilt a small Project Linus quilt.  The top was made in the summer, so it just needed to be quilted and bound - and I got that done! 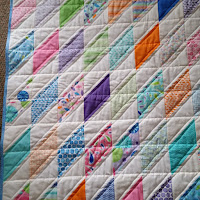 The fabric is Rainy Day from Me and My Sister designs.
In the process of searching for some backing fabric, I discovered another top that's been finished for 2 or 3 years.  I lost my enthusiasm for the project at that point and just set it aside.  I'd been fabric shopping with my daughter a few weeks ago, and bought some fabrics "just because", and they ended up being "just right" for this quilt - and the leftover backing fabric scraps ended up becoming the binding!

The bright fabrics on the front are all from the same (forgotten) line - the backing is a Windham fabric that I got for $7.00/m!
Sewing in my sewing room through the day isn't too bad - but it's harder at night, because the light just isn't great - so I've been getting some knitting done then.  I've been working on socks for Christmas presents - I shared a pic of the first pair in my last post.  The second pair is well on it's way to completion:

The yarn is Knitpicks "Stroll Hand Painted Sock Yarn" - the colour is a combination of aquas and browns, and looks a little richer in real life.  I should be able to finish the second sock in the next week or two - and I hope to have enough time left to knit a hat for my youngest grandson - more on that in my next post!
Linking up to Crazy Mom Quilts and Confessions of a Fabric Addict
Posted by Quilting with Jannette at 8:55 PM 3 comments: