I can use that as my excuse for not posting lately - really!  I have been busy - just look at what I've done...
First off, I forgot to post my Quilty 365 blocks for last week, so I'll start with them: 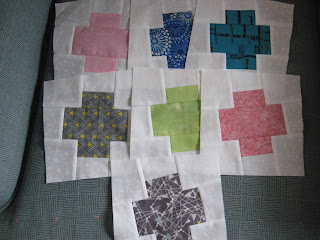 Some of the fabrics came from my stash, and a few will show up in one of my later photos.  These blocks are for Apr. 17-23.
Then, I spent a morning at a friend's house - a few of us gather there every second Monday morning to make cards.  It's a hobby I've been enjoying for about 11 years. 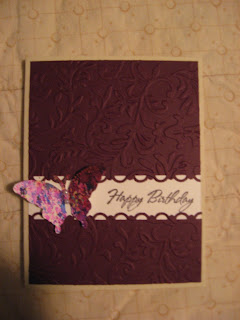 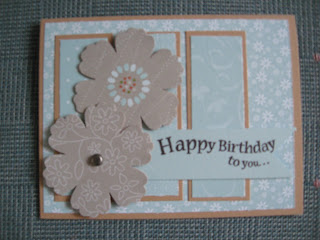 I realized last week that I had completely run out of birthday cards, and I know that I'm going to need a few in the next week or two, so I managed to make these 2 (and a few others) that morning. 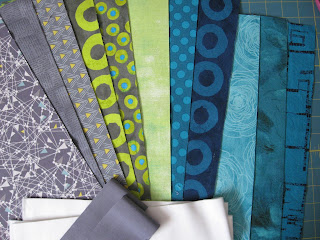 Hubby and I have a wedding to attend in a few weeks, and what better wedding gift than a cuddle quilt?  I had to go shopping for some of these lovely prints, and I may have to get one or two more lime greens.  I'm not so sure that I'll be keeping the 2 grey and lime circle fabrics...  The quilt is a quick sew - large blocks, separated by Kona Snow sashing and grey cornerstones. 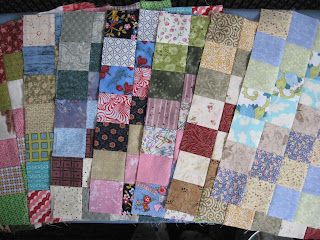 And finally, I have done some more significant sewing - these are just a few of the 12 Scrappy Trip-Around-the-World quilt blocks I've assembled in the last 2 days.
Now I'm off to run some errands - the fabric shop is calling my name!
I'm linking up to Oh Scrap!


Posted by Quilting with Jannette at 8:17 AM No comments:

I've been putting off a very important task - something I've needed to do for at least the past 6 months - cleaning out my sewing room.  My sewing space started off upstairs, then got moved to the basement - and I vowed to sort it out long before Christmas.  Well, I'm sure that you know what happened - nothing!  There were too many gifts to make, then quilting challenges came up... and it was always too easy to come up with an excuse to put it off.  But now I'm working on my Hands2Help quilts, and I needed a bigger space to work in - so I got some of my space cleaned out.  And guess what - I found a whole pile of sewn 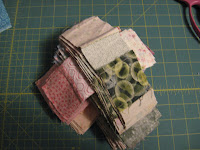 and cut up strips, ready to be reassembled into scrappy Trip Around the World blocks!  So I had to put everything else aside to make up a few blocks: 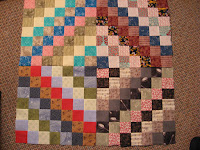 But then reality struck, and I figured that I'd better get to work on what I really needed to put together - my Hands2Help quilts.  These quilts will be going to the Yukon Women's Transition Home, for the women and their children.  I had already sewn the individual blocks up for both the boy and the girl quilts; I had even auditioned a few layouts, but then I decided to make both quilts a little bigger.  I played around with different layouts, and finally decided on 2 different ones.  Here's the boy quilt top: 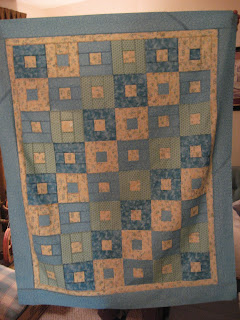 and the girl's quilt top: 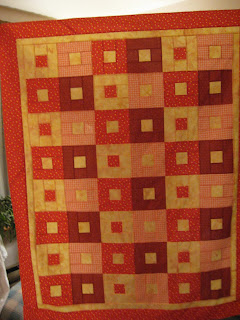 Finally, while I was on a roll, I decided that I should share my Quilty 365 blocks for this past week - the 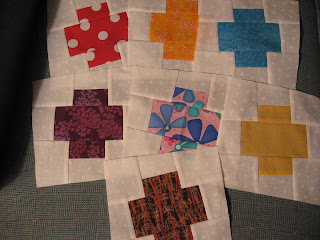 yellow one is today's block, celebrating that spring (and the sunshine!) seems to have finally arrived; the pink floral is for my dear friend Ila, who would have celebrated her birthday yesterday.
I'm going to link up to Sarah's Can I Get a Whoop-whoop, and also Leanne's Scraptastic Tuesday posts.
Posted by Quilting with Jannette at 9:54 PM 5 comments:

I'm still plugging along on my various scrappy projects - the Rainbow Scrappy Challenge, and Quilty 365. You may remember that I didn't actually finish my purple Pieced Tulips for March's Rainbow Scrappy Challenge - but I've not only caught up with the purple blocks that I should have completed for last month, but I've leapt ahead and made all 5 blocks in April's chosen colour (orange)!
On top of all of that, I've still keeping up with my daily Quilty 365 (Dancing Plus) blocks.  I'm trying to make a few quilts for the Hands2Help quilt project, and I have 2 newer projects to make, sooner rather than later. One is a quilt for one of my son's best friends.  Mark, and the love of his life, Ashley, are getting married in about a month, so a quilt is definitely required.  I chose the pattern a few months ago, and I've been picking up fabric here and there, but the time has come to get that quilt assembled!  As well, the son of a very dear friend and his wife, are expecting their first baby early this summer - again, a perfect occasion for a quilt!
So far, only the Pieced Tulip blocks and the Quilty 365 blocks are ready to show - so, first are the five purple blocks from March: 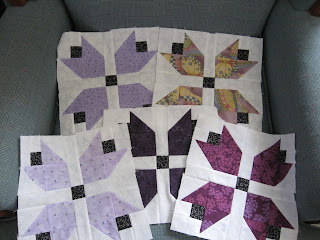 Two of them were done in March (the lightest and the darkest blocks), but I finally made the other 3 blocks. 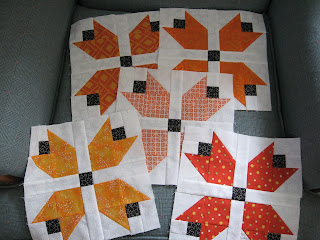 I was on a roll, and I decided that it would just make sense to carry on with the April blocks in orange! 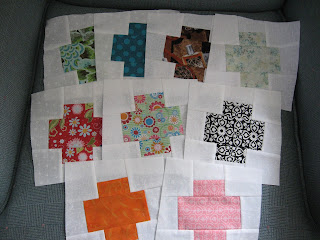 And, while I had the orange fabric out, I cut a block for the Quilty 365 project - it's here with the blocks for the first 9 days of April.
Just in case you're thinking that I haven't done much the past few weeks, let me assure you that a lot of knitting has also been accomplished - nothing that I can share right now - but it's taken up some of my valuable "crafting" time.  I've also been spending a lot of time with my dad - he just turned 87 at the end of March, and needs a little extra attention... and I managed to spend a day looking after my favourite (and only!) grandson.
I'm planning to post two quilt tops that I've assembled for Hands2Help in the next day or two, so pop back in Tues. or Wed. to see what I've done for this wonderful charity project - or click on the button on my sidebar to check out what they need - maybe you can help them out too!
I'm off to link-up with So Scrappy - there are lots of lovely orange projects there!
Posted by Quilting with Jannette at 7:54 PM 5 comments: