This past year has been filled with all kinds of happenings - good, bad and otherwise...  I've managed to accomplish a number of projects, and, as always, I have a pile of other ones to finish.  Well, I have to have something to look forward to next year, right?!
One of the biggest projects I worked on in 2016 was the Quilty 365 project - making a small quilt block for each day of the year.  I wasn't sure that I'd make it through the whole way, but I'm happy to say that I now have 366 little Dancing Plus blocks to assemble into at least 2 quilts!  I'll work on putting them together sometime in January.  These are the last 31 blocks, with a special festive red and gold "fireworks" block to celebrate the coming new year (or the end of this project!) - you can decide which version you prefer... 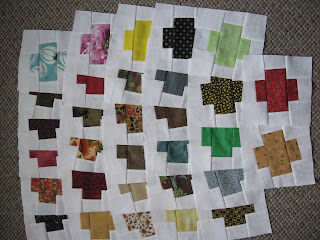 I also finished, and sent off, 4 "hot and cold corner" blocks to Kat's "Covered in Love" quilt block drive. 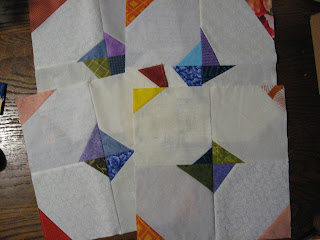 I also made 6 blocks for the Canadian Quilting Association's Big Quilt Bee - they will be joined together with blocks from other quilters across Canada, to benefit 1,000 kids at Ronald McDonald houses.  It's a special project to commemorate Canada's 150th birthday / anniversary.  Each block was to be made slab-style, using fabrics from specific fabric lines.  My blocks were made using the Stonehenge "Oh Canada" line.  They were also mailed out a few days ago. 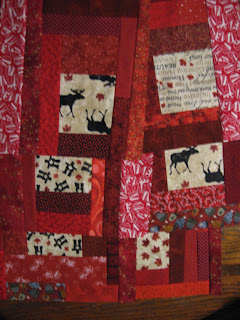 And, we can't forget Christmas!  I made a few gifts for my very special soon-to-be-2 year-old grandson.  He knows that cars drive on roads, and what sounds they make, so I thought he should have his own set of roads and a few cars to play with.  This mat is made with a panel from Northcott; it's one of a collection that can be sewn together to make an entire town.  I just needed one section for now.  The ends have compartments for his cars to be stored in (I bought a few little cars to add to his selection). 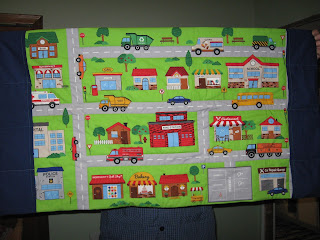 My daughter has also mentioned that she wants us to take our grandson fishing when he gets a bit older, so I was excited to see this cute fishing "game" on a site a few weeks ago.  You sew a washer into each fish's mouth - the fishing "pole" has a worm on it, with a magnet sewn into it.  Bring the "worm" near the "fish" and click! the magnet connects to at least one "fish".  Our grandson was thrilled with both of these gifts! 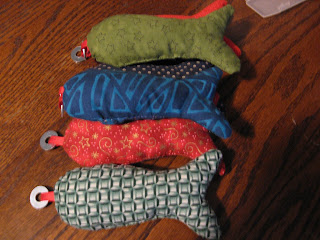 So, that's the end of a few projects - and there will be new things to take their place.  I just heard about another Canada 150 project - a Calgary quilter has researched 150 Canadian women, and has matched each of them up with a 6.5" quilt block.  I've already started that (3 blocks are released every week), and I'll be sharing them here starting next week.  It will make a queen-sized red and white quilt, that I'm going to make for myself.  This project runs into next summer, I believe;  making just 3 small blocks a week is do-able, so piecing the top should go fairly quickly.
I'm hoping for lots of good days in 2017 - and hope that each day of the new year is special for each of you!  Thanks for reading my blog!
Linking up to Quilty Folk; Confessions of a Fabric Addict; and Quilting is more fun than housework
Posted by Quilting with Jannette at 9:11 PM 3 comments:

I'm sorry that I didn't get this finish posted yesterday like I'd hoped - my hubby's and my schedules didn't work out together, and I couldn't get a picture until this evening.  But, I really hope it was worth the wait, because I've FINALLY finished my test of Cathy's Geese Around the Tulip Patch quilt.
It was fun to make, and I really like the pattern.  I had planned to make the crib size, but I ended up making the twin / throw size instead - throw in a few family emergencies / situations, and this took longer than I'd originally anticipated, but I think it turned out really well!  I still need to quilt it, and then comes the really hard part - deciding who will end up with the quilt!
Here it is in all of it's glory!  (Ignore the tassel in the upper left corner please...) 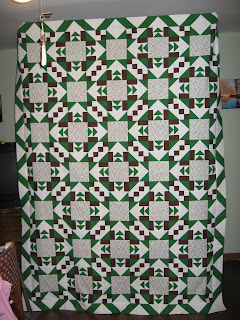 Here's a closer look at some of the design elements: 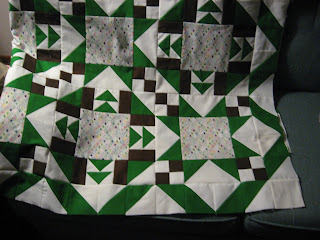 I think the pattern will be available in the new year...
Posted by Quilting with Jannette at 8:15 PM No comments:

I'm finally going to reveal my big project tomorrow, but I have a few small things to share today.  Along with my Quilty 366 blocks, I have a few other scrappy projects on the go.  Some of them make great leader / ender projects, which in turn end up in scrappy donation quilts.  But I discovered a new project a few days ago, and I'm really excited about it!
If you're Canadian, you'll know that Canada will be celebrating it's 150 "birthday" next July 1st.  To mark this momentous occasion, there are a number of quilting projects / challenges popping up.  I had already heard about "Canada's Big Quilt Bee" - a project that aims to collect 1,000 quilts for kids at Ronald McDonald houses across Canada.  I've already started piecing a few slab blocks for that.  But a fellow blogger mentioned a new endeavor - 150 Canadian Women, and I'm so excited to be one of the many Canadian quilters that will be producing great quilts, but also learning something about 150 women that were an integral part of forming the fabric of Canada!  Unfortunately, I missed out on the introduction of this project, so I've missed the first 2 weeks of pattern releases, but I downloaded blocks 7-9, and stitched them up yesterday afternoon.  I shared this project at our guild meeting last night, and it sounds like a few more of our members are going to sign up for this great challenge.
Here are blocks 7-9: 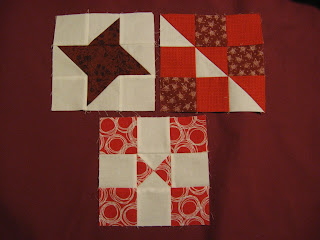 The bottom block represents Viola Desmond, who was just chosen to be the first Canadian woman depicted on a Canadian bill - the $10. bill in this case.  She's often referred to as Canada's Rosa Parks.
As this was our last guild meeting before Christmas, we were encouraged to bring a small, wrapped gift for a game we played.  I thought of a number of gift ideas, and then remembered the box of Dresden plate "blades" that I came across last week.  I hadn't done anything with them after I cut them, so I sewed them together into a rectangle, and made 2 mug rugs from them.   This was a great way to use up some scrap fabrics, and make something useful for this time of year!  (the bottom one seems to have a wavy right side, but that's just an optical illusion!) 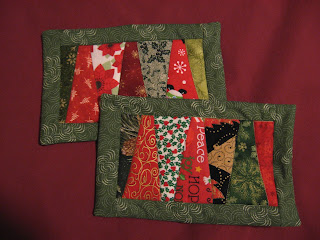 I'm going to share these projects with Cynthia's Oh Scrap! blog post, as well as Leanne's Scraptastic
Tuesday link-up.
Hope to see you tomorrow!
Posted by Quilting with Jannette at 4:42 PM 3 comments:

Actually, most days, I think it's actually racing!
I have my November Quilty 365  blocks to share - I now have 335 blocks finished (and I believe that I haven't repeated a fabric in any of the blocks - not sure whether that's something to brag about!).  When I finish the 31 blocks for December, I will have completed a complete year - a block for every day!  Of course, I chose not to do the circles that many were doing - I probably would not have reached this point if that were the case.  These blocks finish at 6 1/2", and I think they will make at least 2 quilts, and possibly 3.  They will be donated to a charity that provides warm blankets to 3rd world communities, and all sizes are needed, so I'll have to see how large the quilts end up being once the blocks are assembled.
Here are the 30 for this month: 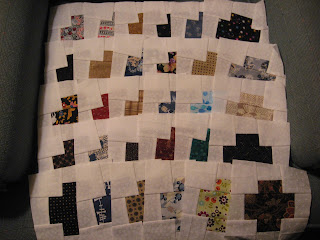 Of particular note is this one - my teardrops - tears of joy, shed as we celebrated the birth of our second grandson on Nov. 17th.  We were thrilled to be able to stay with his older brother while mom (and dad) stayed in the hospital for 2 days - of course, that meant 2 days with no sewing machine...
Thankfully, all is well with mom and baby, and big brother is adjusting to his role quite well (he's almost 2). 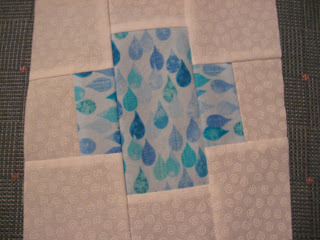 Finally, my test quilt for Cathy is SO close to being finished!  I goofed up some of the instructions, and had to buy more fabric, which ended up costing me 3 days, but I'm almost ready to put the whole top together, and take pictures.  Cathy has been VERY patient with me, and I really need to get this done - there are a few Christmas gifts to sew and knit yet, and I need the time to work on them too.  I hope to have a finish for you by Wed. or Thurs.!
Thanks for stopping by!
I'm going to link up to Quilty Folk .


Posted by Quilting with Jannette at 10:28 PM 4 comments: