It's been a busy month!

I thought that I'd better make an appearance here before you think that I've fallen off the face of the earth....   March has been a very busy month, but not exactly in the way that you'd think....  We've undertaken a HUGE reno project.  Back in the early 70's when this house was built, the gas company was on strike, and so no furnaces or gas services of any kind could be installed.  Consequently, the house had electric baseboard heaters in each room - not a big deal when the monthly electricity bills cost less than a week's worth of groceries for a family.  Now however, the price of hydro has gone up a LOT, and we've been watching the monthly bill get higher every season, it seems.  Come to find out that the insulation is also in need of a major overhaul...  So, we're putting in a furnace, re-insulating the basement walls, and replacing the wiring and some of the windows.
Have you ever put a furnace into an existing house?  No?  It means opening up walls to run ductwork into rooms - and we have 3 levels...  So, everything in our basement, family room and sewing room had to be "evacuated" so that ceilings and interior walls could be removed.  Ductwork and furnace installation started yesterday, and should be done in a week or so.  Insulation, wiring and drywall?  who knows....
All this to say that not much stitching has happened.  I had signed up with Leanne Parsons @devotedquilter to do a QAL of her Medallion Magic pattern.  The fabric is bought, but I have no idea where my pattern is right now.  I also signed up for the 2019 Hands2Help challenge again this year, and managed to make a small quilt with fabric left over from a baby quilt I made 3 years ago, and a few burp pads for one of the charities - Jack's Basket, so they'll be going out in the mail on Monday. 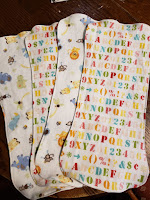 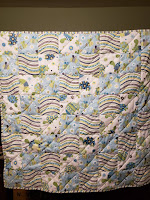 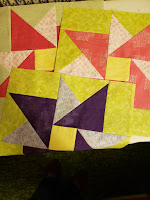 and finished a pile of blue Raspberry Kiss blocks for Dara @stitchedquiltingco - she'll make them into quilts for families of fallen Canadian police officers. 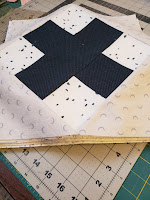 .
I've also been working on some knitting - prayer shawls mostly - and a baby sweater has been started for a baby due in mid-April - I'll share photos when they get finished.
Linking to Quilting is More Fun Than Housework and Confessions of a Fabric Addict
Posted by Quilting with Jannette at 7:19 PM 2 comments: