Hold on to your hats folks - this is going to be a long one!  I have 3 different updates to catch up on, and they all need to be done by midnight tonight, so here goes!
First off, my knitting - last week I had almost 1 slipper sock knit, and I was very confident that I'd have the second one done by this past Friday - and I almost made it!  The slipper sock is done; it just took a little longer to finish.  If you look at the post from Aug. 22nd, you'll see that the top 3 bands didn't really slouch the way they should have, so I decided to tack them down enough to make them stand out.  Now that the knitting is done, I've tacked the bands down, and they look SO much more like the pattern picture - have a look - what do you think? 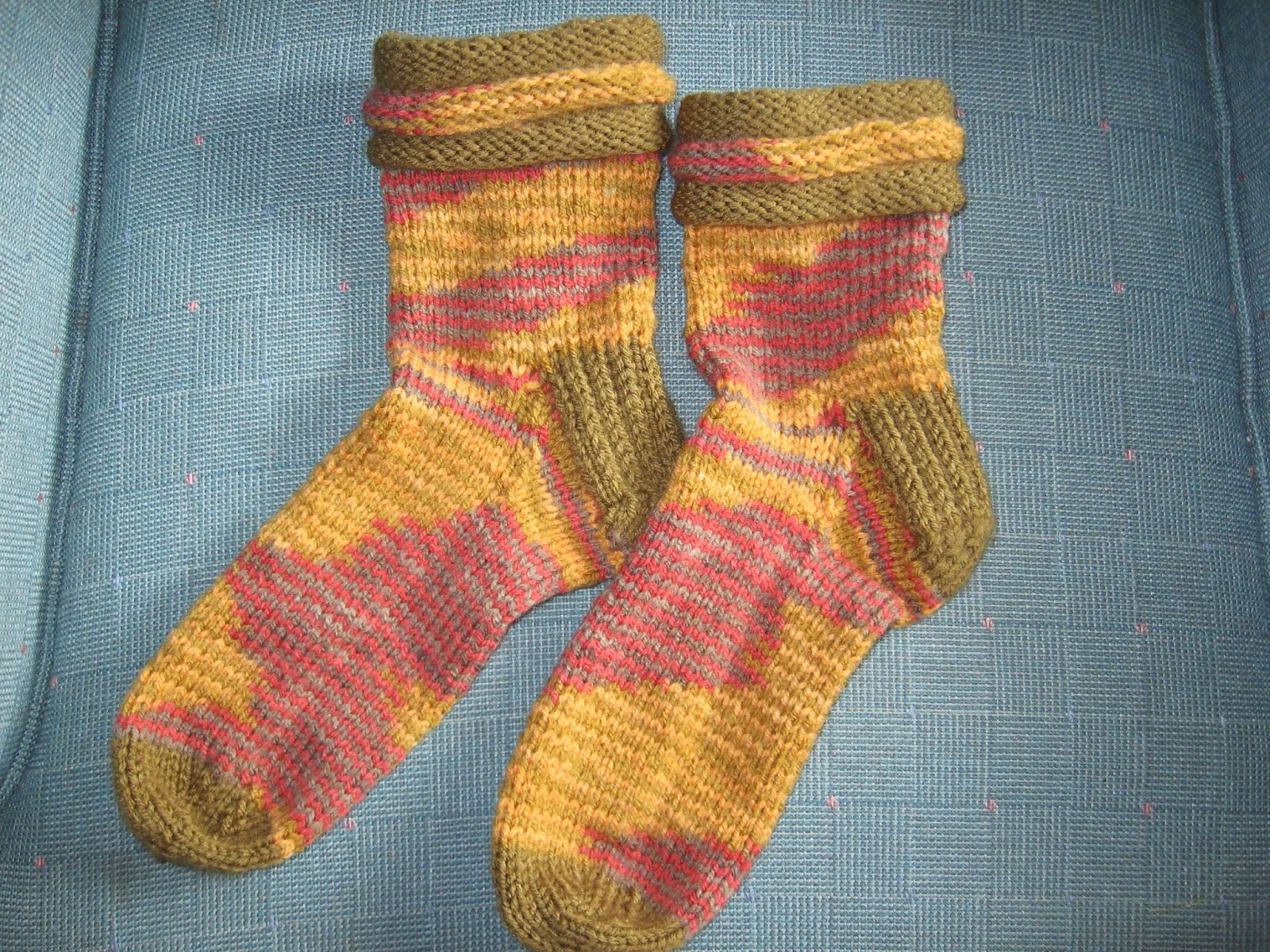 I've tried them on, and they feel nice and warm - so I'll set them aside until the colder weather sets in - like in January maybe....
Then, on Aug. 6th, I posted my ALYoF goal for August - to complete the top for my herringbone quilt.  I used 2 Vintage Modern charm packs and some Snow Kona cotton yardage to make the 2-block set needed for each "blade" of the herringbone.  When that was completed, I crawled around on the floor, trying to get a pleasing mix of colours and patterns, and finally accomplished that.  More crawling ensued, so that I could pin the strips together, and it was finally ready to assemble.  Some green Kona was used to make the first narrow border, and a wider border of Vintage Modern fabric completed the top - and here's that picture: 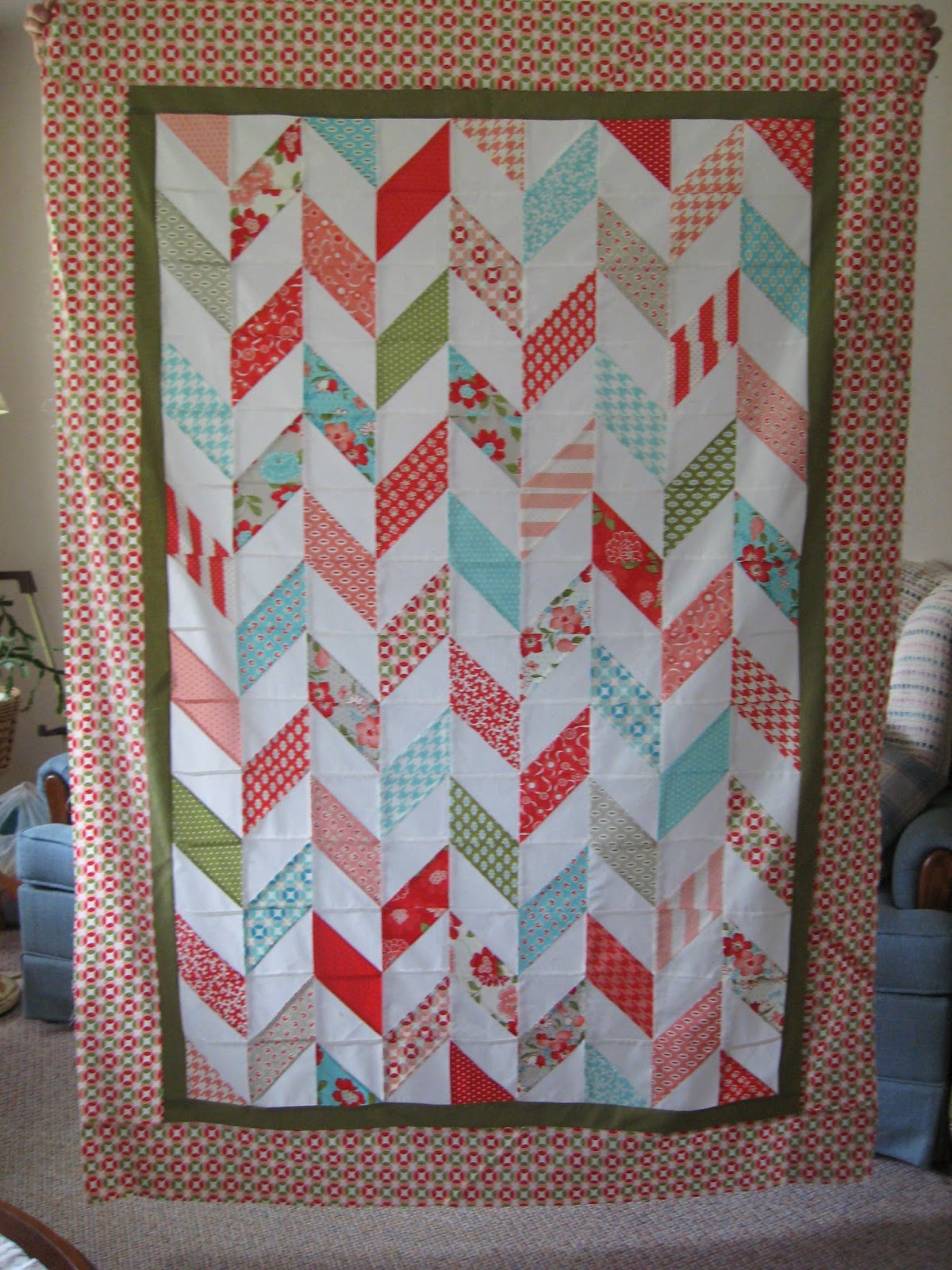 I would have preferred a less "busy" fabric for the outer border, but it was difficult to find any of this fabric line, so we'll carry on with this one!
Finally, I haven't shared any of my Rainbow Scrappy Challenge blocks for this month...  That would probably be because I didn't get them assembled until yesterday afternoon!  So, instead of getting them a bit at a time, you'll be seeing all 3 of my challenge projects at once (and hopefully, that won't happen again!)  Here they are: Scrappy Braids, 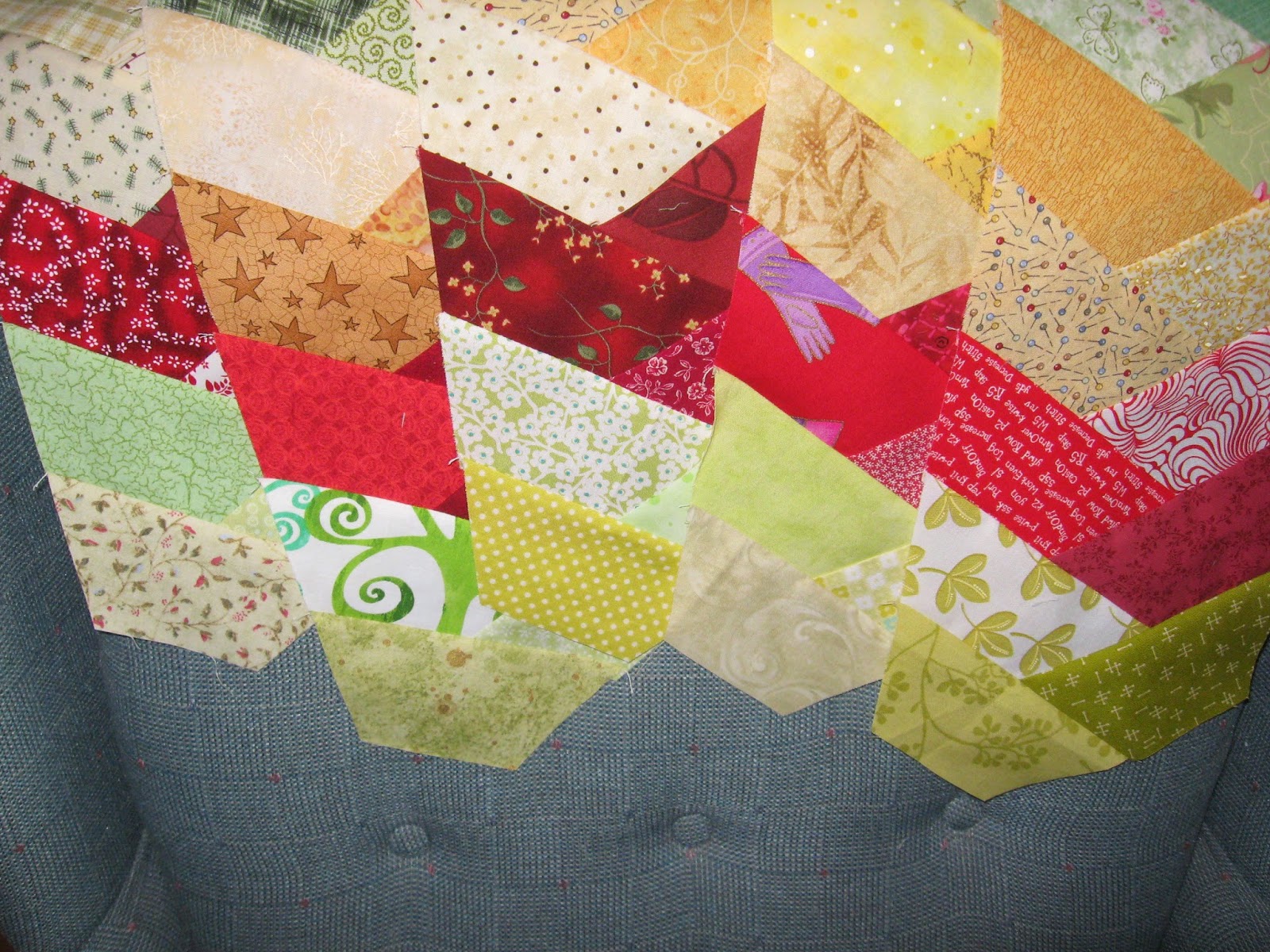 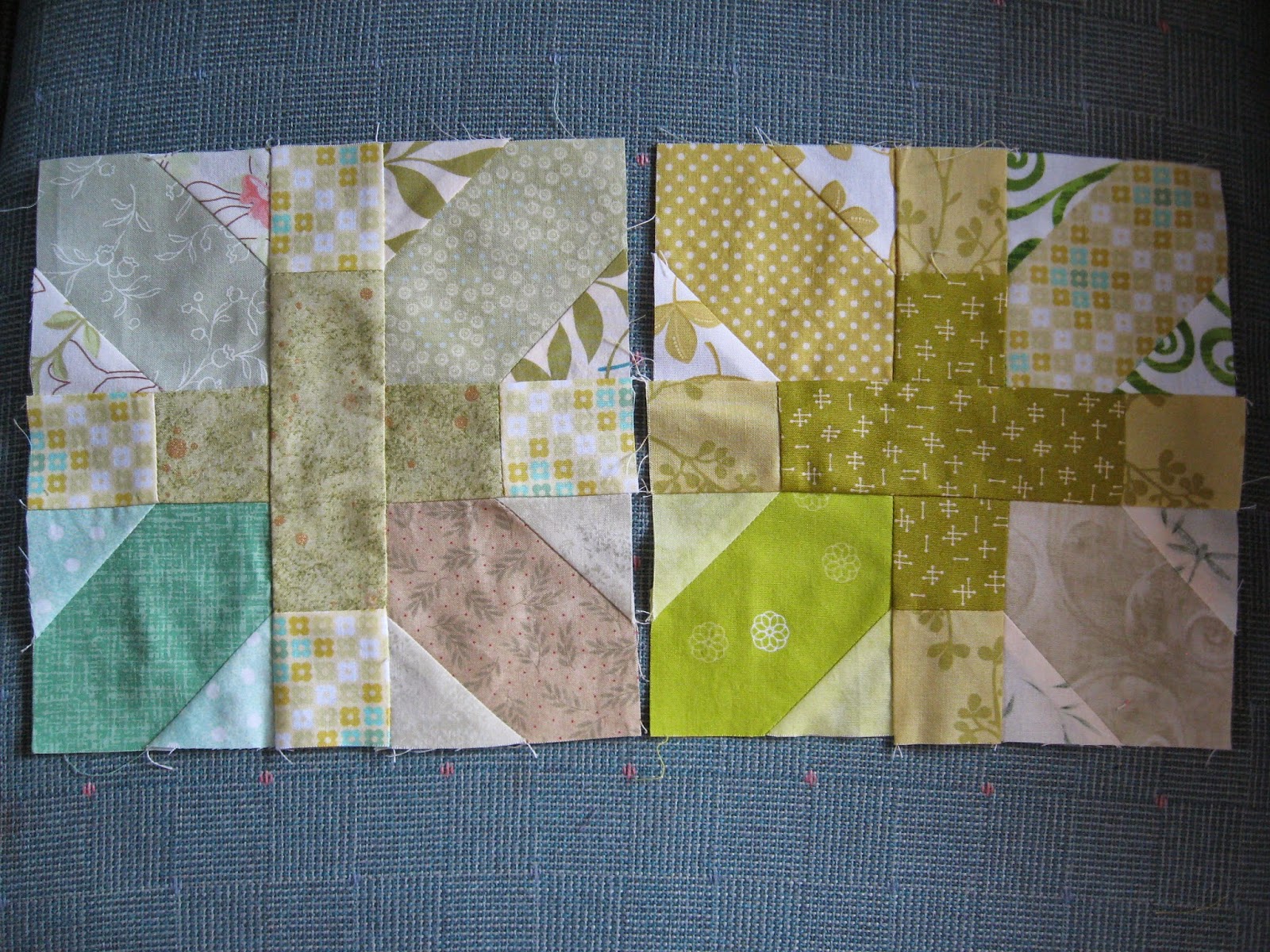 and finally my Kickin' Stash blocks: 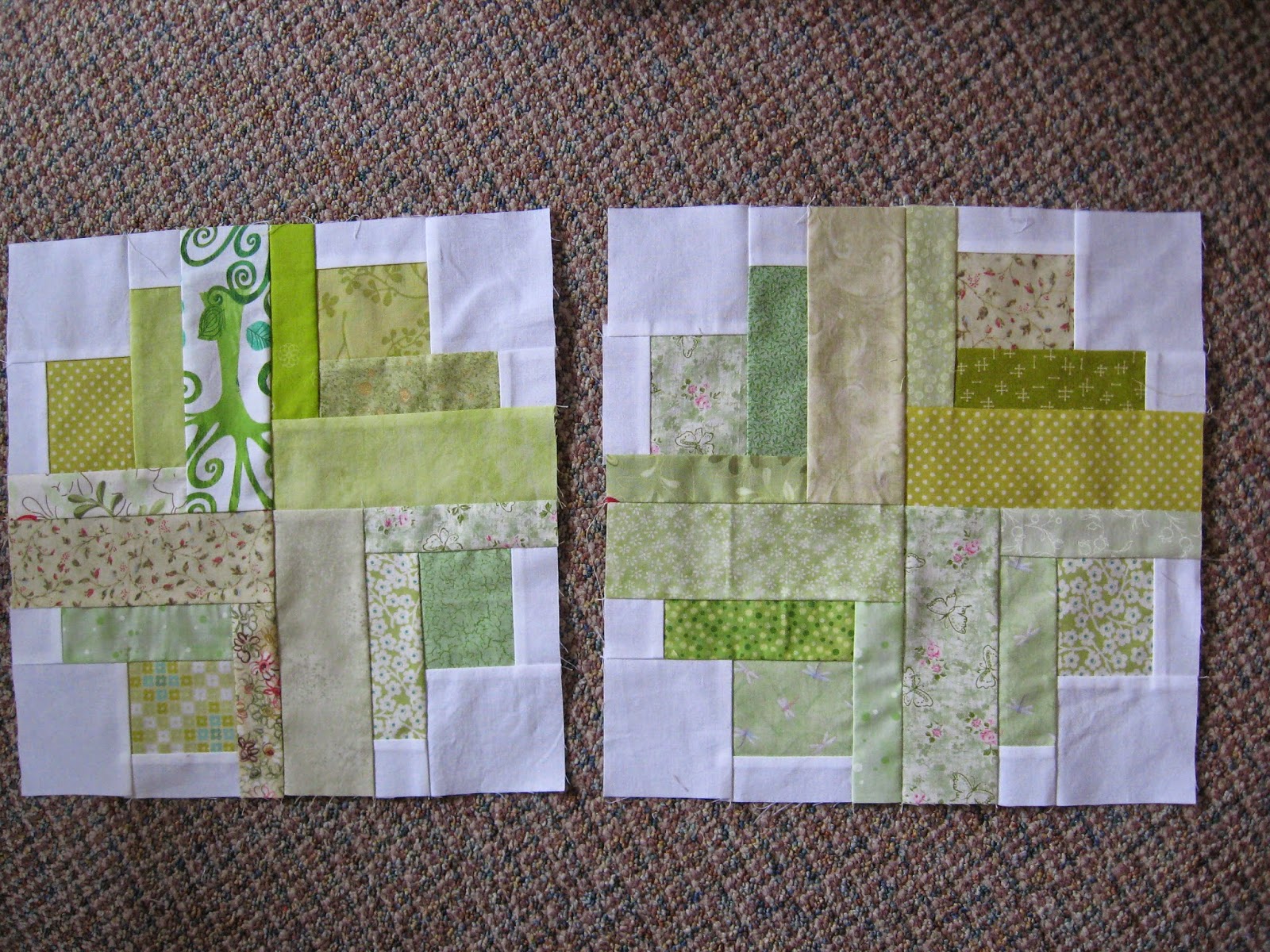 Congratulations if you've hung on all the way to the end!  I promise that I'll try harder next time to post throughout the month!  Thanks for checking in!
Posted by Quilting with Jannette at 1:47 PM 3 comments:

It's been a while since I shared an "OtN" report - partly because I haven't done any more work on my blue shrug / sweater.  It hasn't been terrifically hot here this past summer, so I can't use that as an excuse.....  I have been doing some gardening and preserving, and some crocheting - but most of the knitting things I have on the go right now require a fair bit of attention as I'm knitting, and that's been hard to give lately.
BUT, I did start a quick and fairly easy project 2 days ago, so I thought that I'd share it with you.
Here is my first attempt at making a slipper sock that my girls can use when they come to visit in the winter. The yarn is some unlabeled stuff that I picked up at a tent sale last summer, and it's the perfect weight for this pattern. 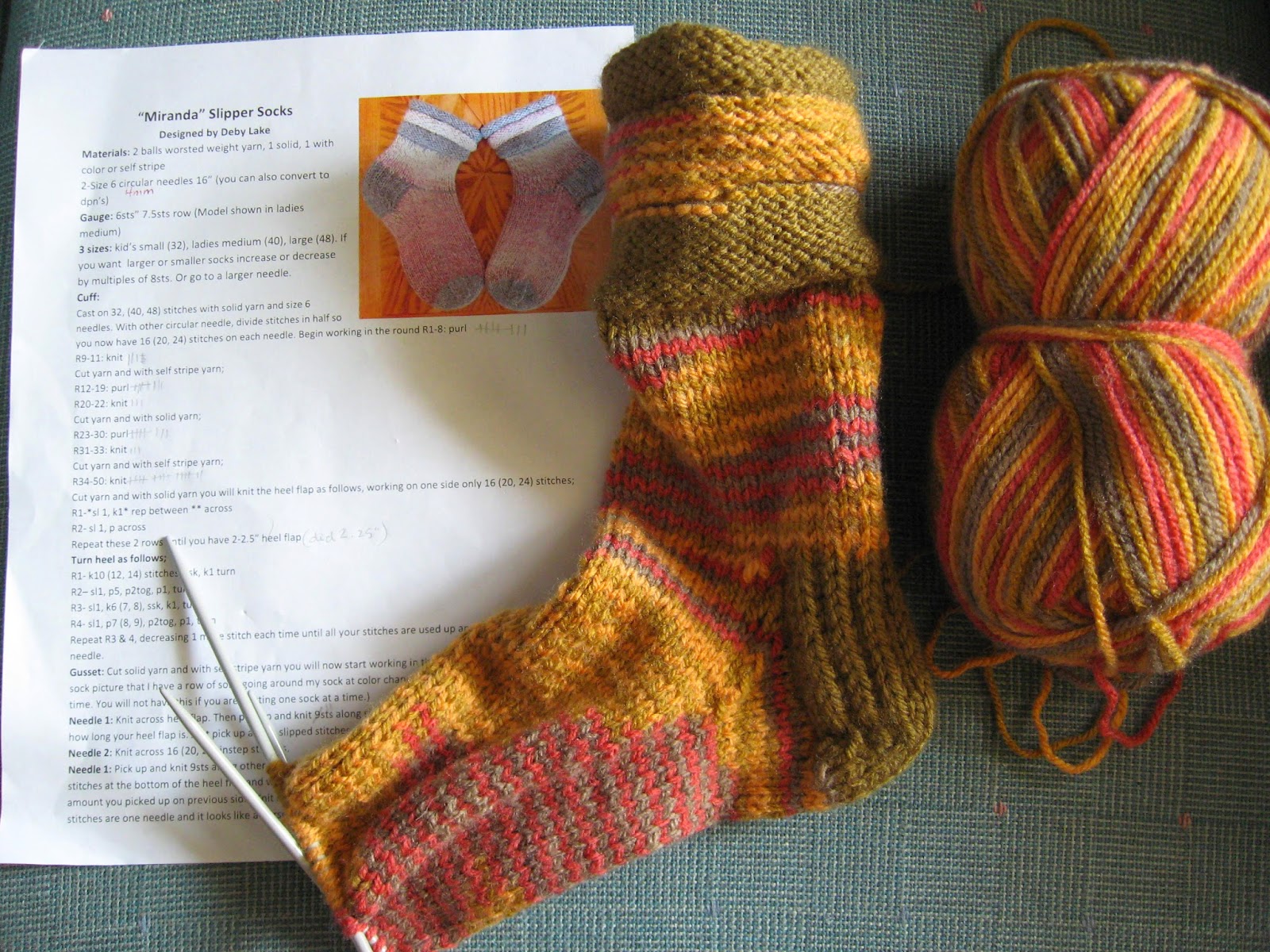 The slipper sock has 3 sections of reverse stockinette at the top of the leg - the first and third bands are a coordinating green yarn (that's also used for the heel and toe), and the second band is the variegated yarn that the rest of the slipper in knit up in.  For some reason, the first band curled up like it shows in the pattern, but the other two don't seem to want to, so I may end up tacking them down to give that look.
At the rate these are knitting up, I should have the pair done for next Friday!
Posted by Quilting with Jannette at 1:11 PM 1 comment:

This is what I'm planning to do this month!

It's already almost too late to enter my quilting project for the ALYoF challenge - August seems to be flying by as quickly as July did!  But, I still have a day (phew!) to link up on Melissa's site so I'd better get going!  I'm choosing a fairly simple project for this month - it's bound to get kind of crazy around here, so a bigger project probably won't get done in time.
I've seen a number of Herringbone quilts around blogland, and I've wanted to make one for a while.  I had 2 charm packs of Vintage Modern that I had cut in half diagonally about 2 or 3 months ago to use as leaders and enders - but, you know how that goes - you can't sew just one!  Pretty soon, my original project took a back seat so I could piece these blocks (that might explain why my June project didn't get done on time!).  But that's where the fun ended - trimming blocks isn't my favourite thing to do - but I'm thankful when they're done!  So, the HST blocks just sat there for a few weeks...
Now that July's project is out of the way, I'm ready to go!  I stitched a few blocks together and staged them as they'll end up in the quilt - and I discovered that you really have to make sure that you piece an equal amount of left-hand and right-hand blocks, or the pattern doesn't work.
I have no idea how big this quilt will be - but as long as it's at least 32" square, it will do for the organization that will be getting this quilt.
So, here are a few of the blocks: 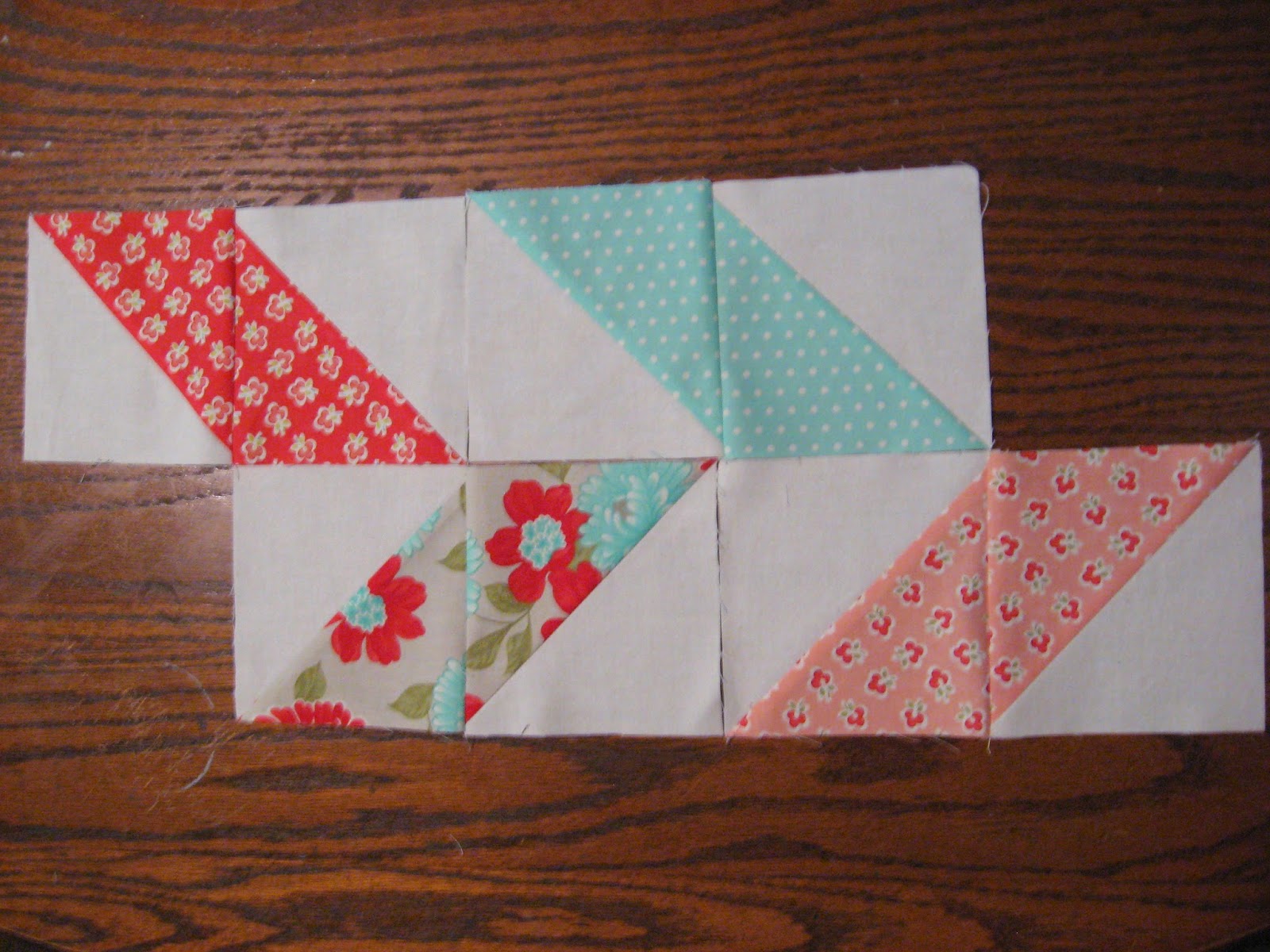 I think I'm going to like this quilt!
Posted by Quilting with Jannette at 11:22 AM 2 comments: